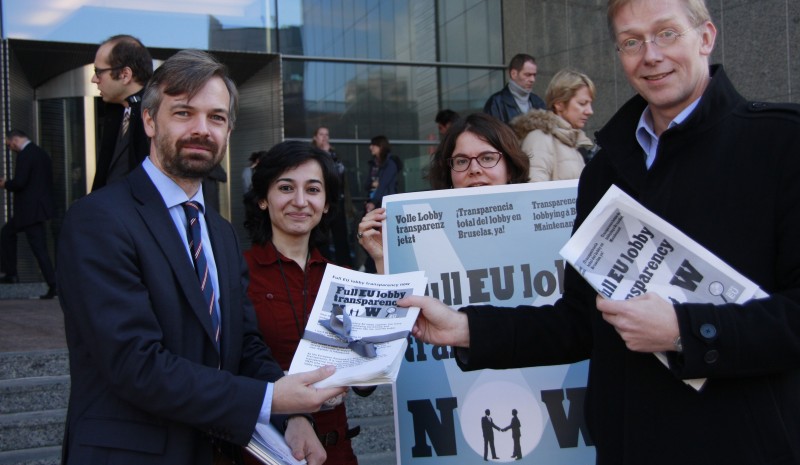 The Alliance for Lobbying Transparency and Ethics Regulation in the EU, ALTER-EU [1] today handed-over a petition signed by more than 10,000 people urging Members of the European Parliament (MEPs) to stand up for full transparency over lobby practices in the EU [2].

The petition demands a mandatory register and the adoption of a clear and enforceable ethics code for all Iobbyists. It comes at a crucial time when the current lobby register is being reviewed. The review is mostly happening through a series of meetings between the European Commission and the European Parliament held behind closed doors.

The petition was delivered to Rainer Wieland MEP, the vice-president for transparency and chair of the parliament's working group responsible for the review of the EU transparency register [3].

Natacha Cingotti of Friends of the Earth Europe, an ALTER-EU member said: "The current voluntary EU transparency register is highly flawed. Most lobbyists ignore transparency rules, while companies who sign up provide inaccurate, incomprehensive or out of date information on their activities. Its time for lobbying in the shadows needs to stop."

Friends of the Earth Europe along with other ALTER-EU members has highlighted many cases of under- or misleading reporting, illustrating the urgent need for a mandatory and reliable register that gives an accurate picture of the influence of powerful lobby groups over crucial EU policies, such as environmental and climate regulations [4].

In a survey commissioned by Friends of the Earth Europe in January 2013 three quarters (73%) of respondents said they were concerned that lobbyists representing the business sector have too much influence on EU decisions. 80% of those surveyed believed there should be mandatory regulation of lobbying to ensure a balanced participation of different interests in decision-making. [5]

Notes:
[1] ALTER-EU is a coalition of about 200 civil society groups, trade unions, academics and public affairs firms concerned with the increasing influence exerted by corporate lobbyists on the political agenda in Europe. Find out more at: www.alter-eu.org

[2] In 2011, the European Parliament expressed support for a transition to a mandatory register but since then no progress has been made towards this goal. http://www.europarl.europa.eu/sides/getDoc.do?pubRef=-//EP//TEXT+TA+P7-TA-2011-0222+0+DOC+XML+V0//EN

[3] More information about the high level group reviewing the register can be found here: http://www.europarl.europa.eu/RegData/bibliotheque/briefing/2013/130538/LDM_BRI%282013%29130538_REV1_EN.pdf It is expected to conclude its work this month and to make recommendations for the Parliament and Commission to consider.