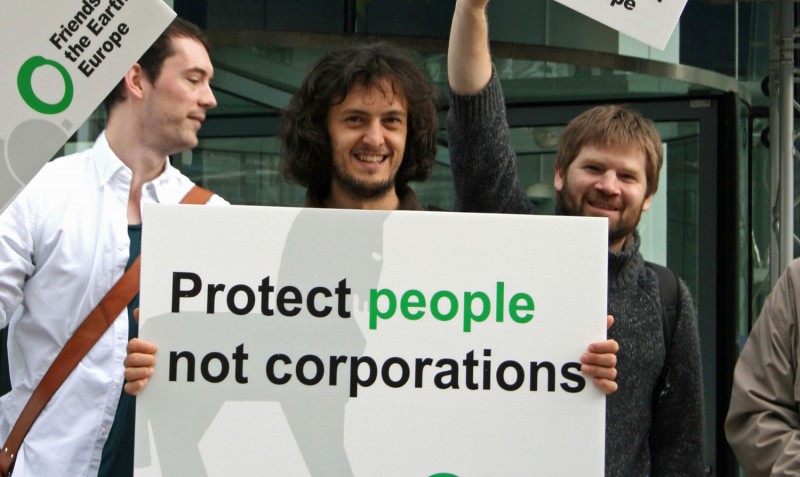 Over 23,000 say no to excessive investor power

As the latest round of the EU-US trade talks begins in Brussels this week, over 23,000 citizens have called for a controversial part of the deal that gives excessive rights to companies to be removed from the negotiating table.

The Transatlantic Trade and Investment Partnership (TTIP), currently under negotiation, includes the controversial investor-state dispute settlement (ISDS) mechanism. This mechanism potentially grants special rights to foreign investors, which would allow them to use the EU-US trade deal to undermine democratically-agreed safeguards that protect people and the environment on both sides of the Atlantic.

Following public outcry at the inclusion of ISDS in the EU-US trade talks, the European Commission launched a public consultation on the mechanism. Civil society groups remain critical of the consultation, the technical language of which prohibits active citizen participation, and does not address the fundamental question of whether investor-state arbitration should be part of the trade deal in the first place.

Natacha Cingotti, corporate campaigner at Friends of the Earth Europe, said: "With this consultation, the European Commission said it wanted to ask the public what they want. They have spoken: no to excessive investor power. Investor-state arbitration is undemocratic and conflicts with the fundamental principle of fair access to justice – it should not be part of the EU-US trade deal, nor any other trade deal that the EU is currently negotiating."

Friends of the Earth Europe, AK Europa and ÖGB Europabüro, set up an online platform to allow citizens to voice their concerns about ISDS. The website www.no2isds.eu has collected over 23,000 contributions from people across Europe and the US who fundamentally oppose the harmful investor-state arbitration system. Combined with initiatives from groups including 38degrees and SumofUs, this has contributed to a record number of over 100,000 contributions to the Commission's public consultation.

The EU-US trade deal will impact upon many aspects of life in Europe and the US, and the European Commission must take citizens' voices into account. Friends of the Earth Europe recently revealed the privileged access given to industry in the talks, and the pro-industry direction of the talks so far. Friends of the Earth Europe is calling for the publication of the negotiating mandate, all documents submitted by the European Union during the negotiations, and the negotiating texts themselves.

Natacha Cingotti continued: "Big corporations are being given VIP access to the closed-door discussions, while citizens have to rely on leaks to understand what is (secretly) being negotiated on their behalf. Everything we've seen suggests the talks are taking a dangerous direction, away from the interests of people and planet. People have the right to know what is being negotiated, and what risks being traded away."

Friends of the Earth Europe will continue to call for the removal of the harmful investor-state dispute settlement from the trade deal, and to challenge other harmful aspects of the negotiations. A transatlantic deal can only be acceptable if it builds a better future for people and the environment, and the voices of citizens are heard in the negotiations.