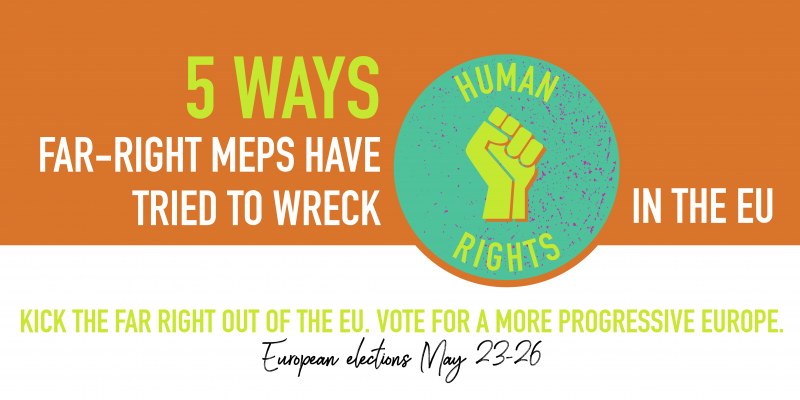 At the moment, there are 175 Members of the European Parliament (MEPs) who we consider to be far-right, or who represent far-right national governments. They are members of three political blocs - the European Conservatives and Reformists, Europe for Freedom and Direct Democracy, and Europe of Nations and Freedom, as well as a number of 'non-attached' MEPs who don't sit with any bloc.

Polling suggests that after this year's European elections in May, this number could increase substantially. This would be a huge problem for our rights and environmental protection across Europe. This week we delve again into the implications - this time for human rights and democracy.

Disclaimer: This blog refers to analysis of European Parliament resolutions. Resolutions are not binding, but they are commonly used by the European Parliament to express its opinion, take a stand on a specific issue and to suggest a political desire to act in a given area.

As MEPs, these people get a platform they simply shouldn't have. Just to mention a couple of particularly unpleasant examples: Did you hear about the Italian MEP and now minister who wanted to expel thousands of Roma people? Or that time when a genuine neo-nazi was elected to the European Parliament and entered the Civil Liberties Committee, causing general shock? If you're wondering how a fascist could be elected in the first place, so are we!

When the European Parliament passed a resolution calling for swift action against hate speech and violence (prompted by the depressing statistic that the number of arrest for right-wing extremist offenses nearly doubled in 2017), far-right parties were the only ones who didn't back it. Extreme-right politicians tolerate neo-fascist violence. We need a Parliament that will condemn violent acts, not passively support them.

2. They refuse to protect human rights and democracy

All children have rights that should be protected and guaranteed. Obvious, isn't it? Not for everybody. A resolution by the European Parliament called on Member States to allocate adequate resources for migrant children and on the Commission to take legal steps against Member States which do not respect children’s fundamental rights. But for far-right MEPs some children are more equal than others: only 12% supported this resolution.

The European Parliament should play a role in safeguarding human rights and watching over democratic institutions. A bigger number of far-right MEPs with anti-democratic views and little interest in human rights would be disastrous for us all.

3. They are already jeopardising democracy and human rights at national level

Ever heard of division of powers? Well, in Hungary this hasn’t existed for a while already. Viktor Orbán’s government is actively intervening in the judicial system, limiting the rule of law in the country. This government is developing a record history of inhumane policies. The latest example? Denying food to rejected asylum-seekers saying Hungary “is not responsible” for them.

Sadly, Orbán is not the only one not feeling responsible for people in need of refuge. In Italy, Interior minister Matteo Salvini took the controversial decision to close ports to migrant boats putting thousands of people at risk.

The Polish Law and Justice Party seems to be eyeing Hungary’s footsteps, also enacting constitutional reform threatening the rule of law. The proposal of an abortion ban was only dropped after vigorous protests around the world.

Oh, and in Austria, the new far right interior minister announced in 2017 that Austria might pull out of international rights conventions, stating that the European Convention on Human Rights was ‘the biggest threat to democracy’.

Do we really need more examples to show extreme-right politicians sabotaging human rights wherever they are?

4. They will weaken the only elected institution in the EU

In many of the attacks on democracy and human rights we've mentioned in national contexts, the European Parliament has reacted in defense of human rights and the rule of law. Having more far-right populists in the institution will weaken its ability to respond to and prevent these threats.

5. They are joining forces

The far-right has been announcing plans to unite as a pan-European nationalist force. There have been meetings between far-right leaders and even a summit in Milan last April.

Oh, and there’s also Steve Bannon with his vision to create the far-right clique “The Movement”.

Giving the far-right more of a foothold in the European Parliament (and the funds that go with it) would surely lead to weaker democratic institutions and human rights in Europe.

Luckily some groups in the European Parliament, such as the Anti-racism and diversity intergroup, are fighting hate speech and discrimination in Europe. Let’s hope they can keep up their work in the new Parliament.

Civil society has united against hate speech as well. The #ElectNoHate pledge warns about the threat to human rights and calls for inclusion and dignity.

We need a Europe that stands up for human rights and democracy. In May’s European elections let's send a loud message against hate and for tolerance and solidarity.

To keep up-to-date on the European Elections, sign up at www.ttimv.eu/EuropeWeWant