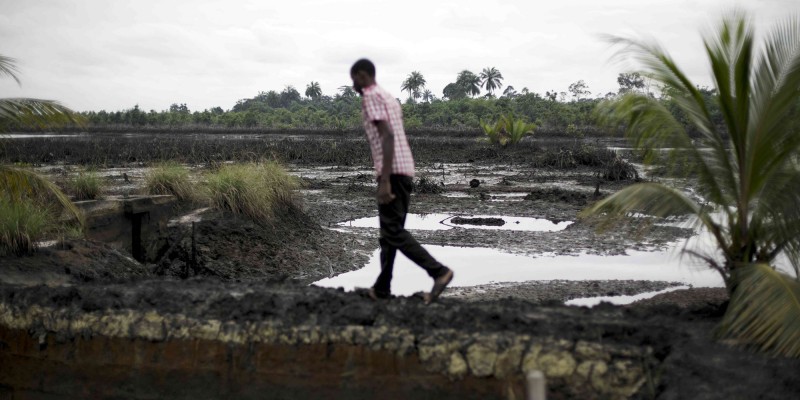 Today, Environmental Rights Action, Amnesty International, and Friends of the Earth Europe called for the immediate clean-up of oil pollution in Ogoniland in Nigeria's Niger Delta, in line with recommendations made by the United Nations Environment Programme (UNEP) in its landmark 2011 study of the region.

One year since the Nigerian Government officially launched a clean-up programme in Ogoniland, communities affected by decades of oil spills are still waiting for actual action on the ground to begin.

The government has made some administrative steps – putting in place the governing structures and appointing a coordinator to lead HYPREP, the implementation agency. But six years after publication of UNEP's report, very little meaningful progress has been made to improve the situation, either by the Nigerian Government or by Shell, the main operating company in the area. In particular:

"Six years after the UNEP report the communities of Ogoniland are still unacceptably waiting for action to clean up their land and water. Justice cannot be endlessly delayed, the Nigerian government needs to urgently ensure the plan is implemented immediately," said Godwin Ojo, Environmental Rights Action/Friends of the Earth Nigeria.

Meanwhile the oil industry continues discredited practices and fails to ensure Ogoniland is free of pollution.

"It's clear that Shell is using the Government's delayed clean-up programme as an excuse for not properly cleaning-up past pollution. The company's responsibility is clear – to properly clean-up it's pollution now" said Joe Westby, Amnesty International.

The UNEP report called for the implementation of emergency measures, the establishment of a $1 billion start up fund and extensive clean-up of Ogoniland.

''It's overdue that the start-up fund is immediately fully funded and the clean-up operation fully staffed. A clear priority should be the immediate delivery of all emergency and priority measures outlined in the UNEP report – no more delays,'' said Colin Roche, Friends of the Earth Europe.