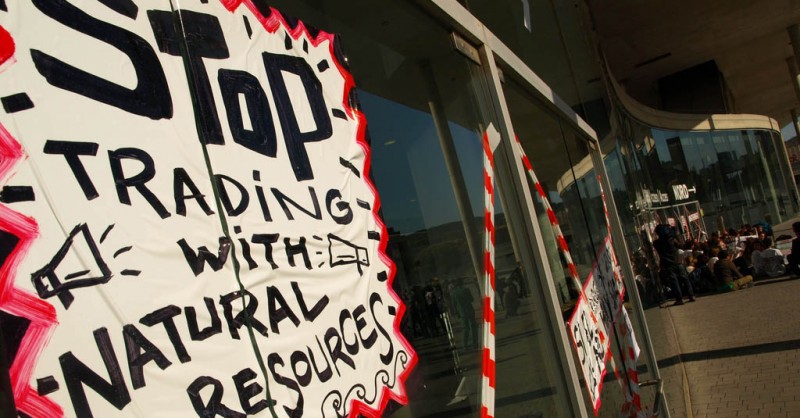 EU-US trade talks: What public safeguards are being traded away?

Friends of the Earth calls for end to secrecy surrounding talks

Friends of the Earth has criticised the secrecy surrounding EU-US trade talks, which closed today in Washington. It warned that public opposition will continue to increase unless people can see that a deal will not damage public safeguards or weaken democracy.

Details of the third round of discussions on the Transatlantic Trade and Investment Partnership (TTIP) have not been released despite calls for transparency from Friends of the Earth and many other organisations in America and Europe.

Friends of the Earth is concerned that the deal has little to do with trade and is rather about de-regulating to allow corporations to bypass public and environmental safety standards to increase their market-share and profits.

Magda Stoczkiewicz, director of Friends of the Earth Europe, said: "As long as these talks continue in secret we have no way of knowing if this is a deal to please big businesses or one to protect people and our planet, and we will fear it is the former.

"All negotiating documents must be made public so that a democratic debate can take place. People must be able to take part in discussions about what kind of economy, environment and future we want for our children. Without more transparency, public opposition on both sides of the Atlantic will continue to grow."

Friends of the Earth is critical of plans for permanent regulatory cooperation between the EU and US. Under discussion is the setting up of a 'regulatory cooperation council' which would cover all existing and future regulations on both sides of the Atlantic. This proposition is very similar to that made by powerful industry lobby groups which want to be more involved in law-making, to the exclusion of the public.

Friends of the Earth believes no deal should be done which undermines any government's right to make its own laws in a democratic way, or which gives more rights to business than to citizens.

Erich Pica, president of Friends of the Earth U.S., had this to say about the past week of TTIP negotiations: “The proposed investment chapter of the transatlantic trade agreement could thwart government efforts to address global warming. Governments seeking to address the climate crisis could be forced to pay the fossil fuel industry billions in compensation. The United States and Europe must be free to take bold action in light of the consequences of runaway global warming.”

Earlier this week more than 200 organisations sent a letter to the chief EU and US negotiators calling on them to exclude an 'investor-state dispute settlement' from the TTIP. The inclusion of such a clause would enable corporations to claim potentially unlimited damages in secret courts if their profits are adversely affected by environmental or consumer regulations.

Friends of the Earth Europe believes that an EU-US trade deal will only be acceptable if it places the interests of people and the environment ahead of the interests of investors and big business. Specifically the trade negotiations should clearly exclude:

Friends of the Earth United States