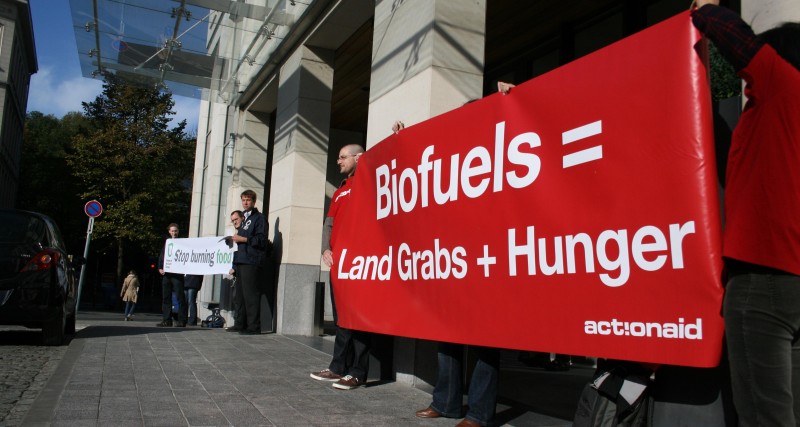 Brussels/Berlin/London, February 2, 2012 – Motorists across Europe are set to pay an additional €18 billion a year for petrol and diesel as a result of EU biofuel targets that have been shown not to reduce emissions, says new research published today [1].

New figures, commissioned by Friends of the Earth Europe and ActionAid [2], show that the planned increase in biofuels use could cost European consumers an extra €94 to €126 billion between now and 2020. This despite evidence that biofuels will actually make climate change worse and increase global hunger [3].

Robbie Blake, biofuels campaigner for Friends of the Earth Europe, said: "Europe's squeezed consumers and taxpayers are paying the price for a flawed green policy that delivers no environmental benefits. Motorists and the environment will bear the brunt of these ill-conceived biofuel targets – with higher prices at the pump and higher CO2 emissions.

"Europe must scrap its biofuel targets and subsidies and replace them with more cost-effective policies that actually reduce emissions from transport and don't wreck the environment."

Demand for biofuels is pushing up global food prices, and driving millions of poor people off their land and into hunger. At least 37 million hectares of land has already been grabbed globally to produce biofuels.

Africa is hardest hit with 60% of land grabs for biofuel crops, depriving local communities of land and water essential for growing food [4].

Laura Sullivan, ActionAid's European policy and campaigns manager, said: "Biofuels are an expensive climate con. EU biofuels targets are not reducing emissions but are pushing up global food prices and driving more people into hunger. EU decision-makers must withdraw targets and subsidies for biofuels and invest in genuine solutions to cut carbon".

Biofuels have been promoted as a 'green' alternative to climate-damaging fossil fuels, but studies for the European Commission confirm that that the EU's projected use of biofuels could actually increase emissions – particularly where countries rely on biodiesel from palm oil, soy and rapeseed [5].

EU targets currently require 10% of transport energy to come from renewable sources by 2020, with almost all of it coming from biofuels. The increased greenhouse gas emissions due to the use of biofuels have been estimated to create an additional 65 million tons of CO2 every year in the EU – the equivalent to putting 29 million more cars on the roads [6].

Biofuel use in the EU currently stands at 4.7 per cent [7] and national plans will expand this to 8.8 per cent of transport energy by 2020. The EU is under scrutiny for ignoring the full social and environmental impacts of its biofuels policies, with a proposed reform of the policy delayed by over a year.

Friends of the Earth Europe and ActionAid support genuinely sustainable solutions to combat rising emissions from transport that do not have the negative effects of biofuels. These include increased car efficiency, reduced energy consumption through better public transport and cycling, and more use of electricity generated from genuinely renewable sources.

In its 2012 reporting, the EU will be under pressure to acknowledge the damaging impacts of its biofuels policies on land rights and food prices globally – with cases already recorded, in countries from Guatemala to Kenya [8].

Based on: Rauch & Thöne, ‘Biofuels - At What Cost? Mandating ethanol and biodiesel consumption in Germany’, FiFo Institute for Public Economics, University of Cologne for the International Institute for Sustainable Development’s Global Subsidies Initiative, Geneva, Switzerland, November 2011

[3] A media briefing, ‘The bad business of biofuels’ prepared by Friends of the Earth and ActionAid

[6] Bowyer C, Anticipated Indirect Land Use Change Associated with Expanded Use of Biofuels and Bioliquids in the EU – An Analysis of the National Renewable Energy Action Plans, Institute for European Environmental Policy, March 2011http://www.ieep.eu/assets/786/Analysis_of_ILUC_Based_on_the_National_Renewable_Energy_Action_Plans.pdf