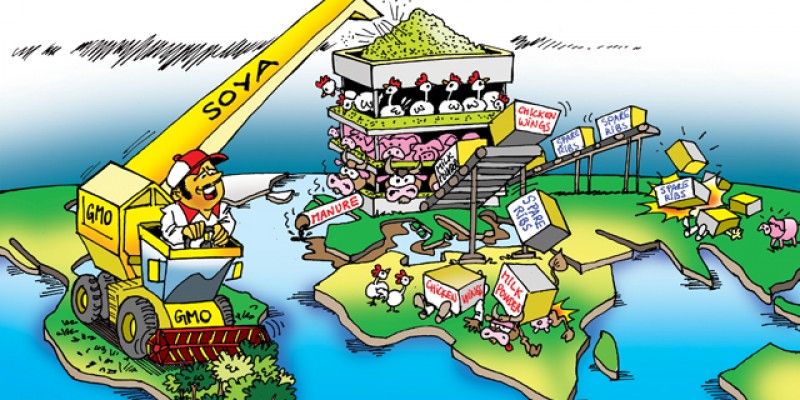 Friends of the Earth Europe along with the IFOAM EU Group and the Pesticide Action Network Europe held a conference on crop rotation and legume production in the European Parliament today. Agricultural scientists, farmers and campaigners came together to discuss the path to a more sustainable and resource efficient farming policy in Europe.

The event came at a crucial moment with the European Parliament and the Council currently considering the Commission's proposals on the reform of the CAP. Experts presented the benefits of sustainable cropping systems and highlighted the contribution of crop rotation and legume cultivation in lifting the environmental performance and economic resilience of European farming.

The event was held in co-operation with S&D MEP Karin Kadenbach and MEP Martin Häusling with speakers Christine Watson, Leader of the Soil Team at the Scottish Agricultural College, Anouk Cormont, Researcher at Wageningen University and Christoph Dahlmann, project manager with the German small farmers association ABL in North-Rhine Westphalia.

MEP Martin Häusling introduced the event arguing that over the last decades crop rotation has become a farming exception in many countries across the EU with leguminous crops covering only 3% of EU crop land, while the EU imports 40 million tons of protein crops to meet its demand for protein livestock feed.

Christine Watson challenged policymakers to place long term benefits rather than short term gains at the heart of farm policy. She explained the environmental benefits of crop rotation and legume cultivation, which can not only decrease input costs, but reduce the risk for farmers by contributing to weed control and limiting dependency on inputs.

Anouk Cormont presented the key findings of a study that outlined the potential of domestic legume cultivation in the livestock sector with cases studies from arable and mixed farms in four regions in the Netherlands and Germany. Research findings showed that allocating 20% of arable land for grain legume cultivation could deliver many benefits including an increase in income.

Christoph Dahlmann argued that crop rotation and increased legume cultivation are solutions to Europes' protein feed deficit. He argued that a shift towards more sustainable cropping systems is required and called for more support for farmers who incorporate legumes into their cropping systems.

A real transformation can be brought about by putting crop rotation at the heart of agricultural reform, with active support for sustainable cropping systems such as those used on organic farms, that deliver continuously higher levels of sustainability.

Friends of the Earth is campaigning for a European agricultural policy that that benefits both farmers and consumers and respects the world's finite natural resources.
We want to see a reform of the CAP that will have a major impact on how the farming sector meets the challenges of climate change and biodiversity collapse, creates a vibrant and fair rural economy, stable food prices and in ensuring long term food security for a growing global population.

Report: The Truth behind the CAP: 13 reasons for green reform