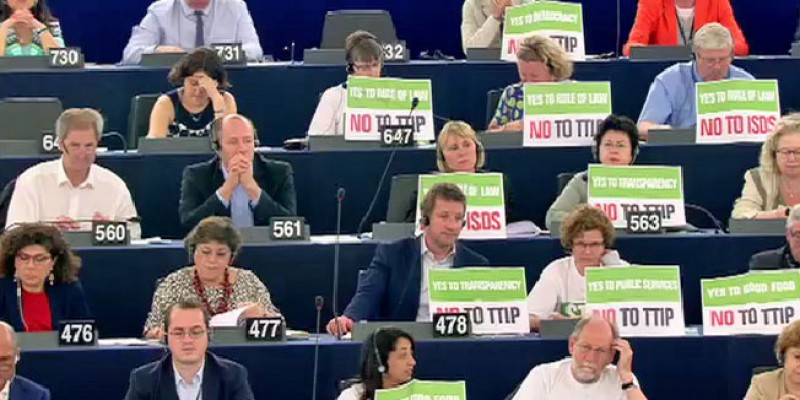 The European Parliament today expressed its support for the TTIP trade negotiations between the European Union and the United States.

The resolution adopted today [1] is the parliament’s unique opportunity to give its opinion on the ongoing trade talks. The result of the vote is a setback for citizens, the environment, and democracy, reacted Friends of the Earth Europe.

Natacha Cingotti, Friends of the Earth Europe trade campaigner, said: “The people of Europe are rightly concerned about the threat TTIP poses to our environment, food, health and social protections – they expected the European Parliament to take a strong stance but MEPs have sided with big business and put democracy at risk by supporting these talks. The parliament has backed dangerous propositions within TTIP such as special privileges for foreign investors and plans to permanently align existing and future rules between Europe and the US which would lead to lower environmental, food and safety standards.

“Ignoring the massive public mobilisation against this dangerous Trojan Horse treaty will only result in strengthening opposition to it.”

Over the last weeks, infighting within the parliament over controversial aspects of the resolution has echoed growing public concern about the transatlantic talks.

Yet the final text agreed today fails to acknowledge these concerns or to clearly call for the exclusion of the most dangerous proposals within the talks. MEPs have failed to come out against:

The next round of negotiations between EU and US negotiating teams will take place next week in Brussels (July 13-17) against a background of growing resistance across Europe.

Hundreds of municipalities have declared themselves ‘TTIP-free’ in opposition to a negotiation in which they are not consulted and that will affect their ability to regulate at the local level if it comes to an agreement.

[1] The full text of the draft resolution is available here: http://www.europarl.europa.eu/sides/getDoc.do?type=REPORT&reference=A8-2015-0175&language=EN

[2] The compromise on investor-state dispute settlement reads:
"To ensure that foreign investors are treated in a non-discriminatory fashion while benefitting from no greater rights than domestic investors, and to replace the ISDS-system with a new system for resolving disputes between investors and states which is subject to democratic principles and scrutiny where potential cases are treated in a transparent manner by publicly appointed, independent professional judges in public hearings and which includes an appellate mechanism, where consistency of judicial decisions is ensured, the jurisdiction of courts of the EU and of the Member States is respected and where private interests cannot undermine public policy objectives.”