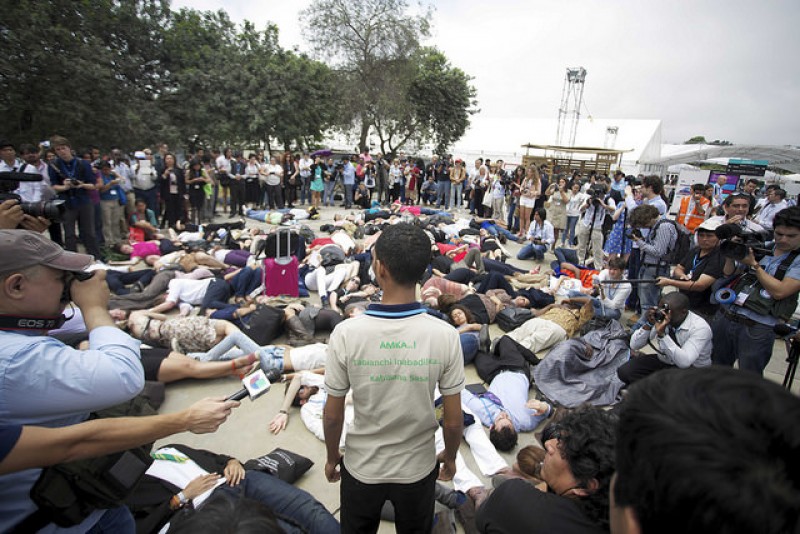 Lima climate talks do nothing to prevent climate disaster

Time for people to lead the way

December 14 - The UN climate talks ended in Lima today – 36 hours behind schedule – with a weak text from world governments, which contrasted sharply with the real leadership and inspiration demonstrated by social movements. Rich industrialised countries are responsible for the lack of an equitable response in the face of planetary emergency and increasing injustice, Friends of the Earth Europe said.

As the Philippines endures more extreme weather and communities around the world pay for the carbon excess of others with their lives and livelihoods, the Lima outcome does nothing to stop the climate crisis. The outcome lacks courage, justice and solidarity with millions affected by climate change and instead leaves the world on track for 4-6°C of average global warming.

As the talks closed, Susann Scherbarth, climate justice and energy campaigner,said: “We have to tell the truth – the progress is pitiful and fails us given the scale of the planetary emergency. World governments remain far from where they need to be if they are to make an adequate equitable agreement to tackle climate change in Paris 12 months from now. An agreement must include strong action to cut emissions by 2020.

"The European Union has come here claiming to be committed to very ambitious action, but the truth is that Europe and other industrialised countries are at the root of climate injustice. People around the world, especially the poorest, are already suffering from the changing climate, yet rich country governments refuse to quit dirty energy and embrace a clean renewable future."

Away from the negotiating halls, social movements continued to mobilize and build an enduring movement to implement the real solutions to the climate crisis. The Peoples' Summit on Climate Change (Cumbre de los Pueblos) – running parallel to the UN talks - gathered together social movements from Peru, Latin America and all over the world to exchange experiences and build momentum to bring about the societal transformations needed to address the roots of the climate crisis and create a more just world.

"The conviction, solidarity and ambition expressed at the Peoples' Summit, it makes government failure to meet people's needs look even more scandalous," said Jóse Elosegui of Friends of the Earth Uruguay. "On the one hand we see complacency and bowing down to the will of corporations, while on the other hand we see determination and practical, real solutions to this crisis coming from the people who actually have to deal with it but played no part in creating this crisis."

More than 15.000 people marched on December 10 in the March in Defense of Mother Earth. They called for justice and real solutions to the climate crisis, including steep and immediate reductions in carbon emissions, stopping fossil fuels and deforestation, building renewable community-owned energy solutions, and transforming our food systems, all in the context of respect for human rights.

In parallel to the talks in Peru, Young Friends of the Earth Europe is hosted a youth convergence in Brussels for 60 young people from 18 countries. 'Lima in Brussels' participants followed the negotiations as they unfolded in Lima, shared skills, took action and made plan for the 2015 climate talks in Paris.

"We had hoped that this would be the year that the process was opened up to voices from civil society and the global South, but as the climate talks draw to a close it is becoming clear that the ears of the global North are closed to any just and effective climate solutions. We the youth are beyond angry and we will hold rich developed countries accountable for their climate crimes," said Maruska Mileta from Young Friends of the Earth Europe.

Friends of the Earth International is contributing to mobilizing people, networks and groups from around the world, with real solutions and people's leadership at its core, on the road to Paris and beyond.