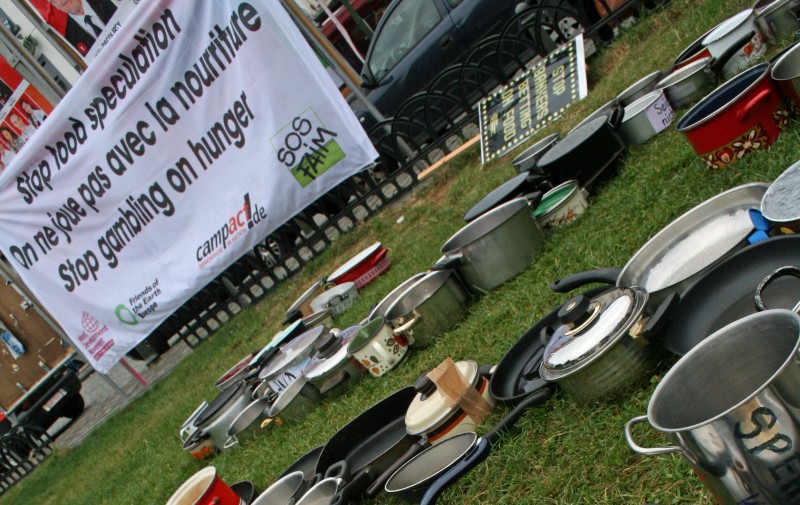 Brussels, September 26 - Today the European Parliament's Committee on Economic and Monetary Affairs (ECON) adopted its report on the review of the Markets in Financial Instruments Directive (MiFID). This piece of legislation is critical to achieve stronger regulation of commodity derivative markets and limit harmful financial speculation on food.

Friends of the Earth Europe, Oxfam, World Economy, Ecology and Development (WEED), and World Development Movement welcome the introduction of mandatory limits on speculation but warn that a number of loopholes must be fixed to make the proposed rules effective.

Anne van Schaik, accountable finance campaigner for Friends of the Earth Europe, said: "MEPs have a unique opportunity to curb food speculation in commodity markets but it is crucial that MEPs make sure the regulations work and put the hunger of people before the hunger of the financial sector."

Marc Olivier Herman, Oxfam's EU policy advisor, said: "Betting on food prices is unacceptable in a world where nearly 1 billion people are going hungry. Today's vote shows that there is a majority in the European Parliament in favour of limiting harmful financial speculation. However, the text adopted today falls short of what is needed to tackle food speculation."

Christine Haigh, the World Development Movement's policy officer, said: "The text adopted today by the Economic Affairs Committee contains dangerous loopholes: an overly narrow definition of the limits to be imposed on speculation and generous exemption clauses excusing some companies from regulation. Unless these problems are fixed, harmful speculation will continue to fuel the devastating price volatility we are seeing on global food markets."

Hours before the vote, campaigners used hundreds of pots and pans to spell out 'Stop food speculation' in giant letters outside the European Parliament. The 925 pots and pans used represented the 925 million people facing hunger worldwide.

At the same time, Friends of the Earth Europe, Campact, SOS Faim and World Development Movement presented a petition with over 100,000 signatures from across Europe to the lead MEP for the legislation, Markus Ferber of Germany.

This joint statement was made by Oxfam; Friends of the Earth Europe; World Economy, Ecology and Development (WEED); World Development Movement

NGOs have been advocating in favour of position limits; these cap the number of contracts in a particular commodity that can be held by a trader or group of traders, preventing concentration by the individual or group concerned. This ensures traders do not 'corner' markets or exert an excessive influence on prices.

The text adopted today by the ECON Committee of the European Parliament imposes limits only on net positions rather than on the amount of contracts or the open interest. Moreover the text does not require that limits apply to the entire lifetime of a derivative contract. This risks making the limits on speculation largely ineffective.

Soy and maize prices were at all-time highs in July (World Bank) and prices of cereals and vegetable oils remained at peak levels in August (FAO). Commodities markets are subject to a wide range of influences, but recent years have seen a massive shift in the level and nature of financial speculation. There is rapidly mounting evidence that this shift has exacerbated price volatility and is contributing to elevated prices.

Next steps: The European Parliament will hold a vote on the Markets in Financial Instruments Directive (MiFID) in October. Negotiations are also underway in the Council on this legislation. European Finance ministers are expected to agree on their position at their meeting on November 13th at the earliest. Negotiations will then begin between the Council and the European Parliament to agree on the final version of the legislation to be adopted by both institutions.