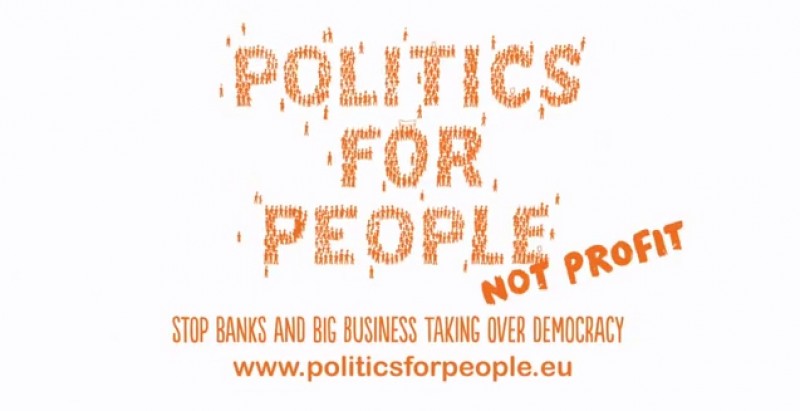 MEPs pledge to stand-up for citizens and democracy

Today, the Alliance for Lobbying Transparency and Ethics Regulation (ALTER-EU) of which Friends of the Earth Europe is a member, together with a broad coalition of civil society organisations from across Europe, launched their campaign to urge candidates for the upcoming European elections to "stand-up for citizens and democracy against the excessive lobbying influence of banks and big business". [1]

Prominent MEPs have already signed-up to the Politics for People campaign. These include: Ska Keller, joint European Commission President candidate for the Greens; Gabi Zimmer, leader of the GUE-NGL bloc; Evelyn Regner from the Socialists Group; Monica Macovei from the European People's Party; and Corinne Lepage from ALDE; with over 40 MEPs signed-up in total. [2]

"Seven out of 10 European citizens are concerned about the excessive influence of industry lobbying on EU decision-making here in Brussels, and rightly so. Too many of our laws have the fingerprints of big business lobbyists all over them – from climate to public health to trade. We need MEPs who will defend the public interest and stand-up for peopleover profit", said Olivier Hoedeman from Corporate Europe Observatory, a steering committee member of ALTER-EU. [3]

"Lobbying will be a hot topic both during and after the elections, which is why it's encouraging to see a wide range of MEPs already committed to tackling the issue. We hope that more candidates from across the political spectrum will join the Politics for People campaign, sign the pledge and agree to take strong action, if elected, to defend the public interest against excessive lobbying", points out Pam Bartlett Quintanilla of Access Info Europe, another Steering Committee member of ALTER-EU.

The centrepiece of the campaign is an interactive website www.politicsforpeople.eu which any EU citizen can use to directly contact their European candidates and invite them to sign the pledge. The website features case studies explaining how excessive industry lobbying impacts upon the daily lives of ordinary EU citizens, as well as information about how MEPs can stand-up to it. A campaign video explains the problem of corporate lobbying and feature four MEPs endorsing the pledge. [4]

The Politics for People campaign has partners in 19 member states; a full list is available on-line. [5]

Across Europe, members of the Politics for People coalition will be holding election debates, speaker tours and other activities to raise the issue of excessive and untransparent lobbying in the EU and to propose solutions.

"It is essential that we tackle the problem of excessive lobbying from banks and big business in Brussels. In the past few years we have seen big banks avoid effective regulation after the financial crisis!", said Amir Ghoreishi of AK EUROPA, one of the
supporting organisations behind the campaign.

"In addition, the processed food industry defeated proposals for health labels on packaging; climate policies have been downgraded; and EU trade deals (like the current proposed EU-US deal) consistently put profits before people," said Max Bank of LobbyControl in Cologne, another steering committee member of ALTER-EU.

You can follow the campaign on twitter (@altereu) and via the hashtag #pforp. To find out more about the campaign, please visit www.politicsforpeople.eu

[1] ALTER-EU is a coalition of about 200 civil society groups including Friends of the Earth Europe, trade unions, academics and public affairs firms campaigning against the increasing influence exerted by corporate lobbyists on the political agenda in Europe.

[3] The EU Citizens Opinion Poll, January 2013
[4] The campaign video can be viewed here[5] A full list of the Politics for People supporting organisations is available here: http://politicsforpeople.eu/en/about-us/