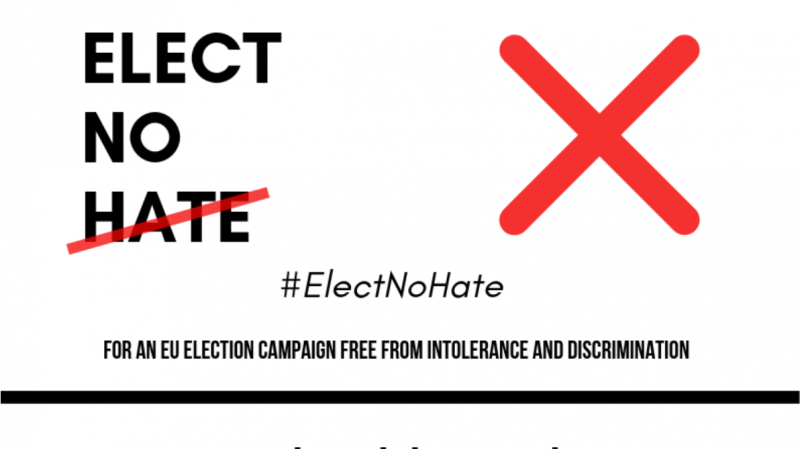 MEP candidates, politicians, the media and those in the public eye are asked not only to avoid engaging in, or amplifying, rhetoric that may incite discrimination, prejudice or hatred on any grounds, but also to actively counter it.

The diversity of organisations behind this appeal – working across the EU for justice in the areas of human rights, labour rights, development and the environment – reflects how hate speech and divisive rhetoric inextricably pervade and threaten all aspects of our lives, most notably in the context of populism and extremism.

"At a time when hate speech and divisive rhetoric cause a worrying backlash and backsliding for all human rights across Europe, ILGA-Europe considers it crucial to unite with a broad and diverse alliance of organisations to take a clear stand against hate speech and divisive rhetoric targeting any community," commented ILGA-Europe's Executive Director Evelyne Paradis.

"The protection of one group must never be used as an excuse for discriminating against others. This is why all EU election candidates signing ILGA-Europe's ComeOut pledge are also requested to sign the #ElectNoHate appeal."

In Europe and elsewhere, recent evidence highlights how hate speech and divisive rhetoric lead to harm in everyday life.

A 147% spike in homophobic and transphobic hate crimes and a 41% increase in the number of racially or religiously aggravated crimes following the Brexit referendum campaign is a stark example of this. Women – who are in general 27 times more likely than men to be harassed online (3) – also experience exceptionally high levels of violence in politics, with 85.2% of women reporting having suffered psychological violence while in office. (4)