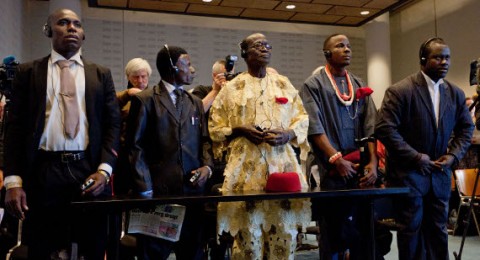 THE HAGUE, THE NETHERLANDS, OCTOBER 11, 2012 - For the first time in history, a Dutch court verdict is expected about the case of a European company, Anglo-Dutch oil giant Shell, which appeared in court today to account for damage it caused abroad. [1]

Lawyers for both parties pleaded at a key hearing in The Hague today and the court announced that the verdict is expected on 30 January 2013.

"A positive verdict will have groundbreaking legal repercussions. It will allow victims of multinational corporations in developing countries to obtain justice in Europe," says Geert Ritsema, globalisation campaign leader at Friends of the Earth Netherlands / Milieudefensie.

"Due to the poor maintenance of its pipelines and infrastructure Shell lets tens of millions of barrels of oil leak in Nigeria, with disastrous consequences for local people and the environment. We hope for a positive verdict. We hope that Shell will own up to its glaring pollution. We hope that justice will be done for the four Nigerians who sued Shell in The Netherlands," says Nnimmo Bassey, Executive Director of Friends of the Earth Nigeria and Chair of Friends of the Earth International.

"Shell polluted with impunity and destroyed our livelihoods. Several years after the spills we still see and smell the oil and in some communities half of the population has respiratory diseases. Shell must now clean up properly and prevent more oil spills from happening. Justice has to be done here in The Netherlands and Shell must be held to account," says one of the four plaintiffs, Eric Dooh from Goi, Ogoniland, Nigeria.

The serious contamination of the oil rich Niger Delta has had disastrous consequences for the local people and their environment. Oil leaks regularly pollute the fields, forests and water. These leaks are a heavy burden on agriculture and fishing.

Shell is the operator of Nigeria's largest oil fields and bears significant responsibility for the oil pollution. The UN, among others, has stated that Shell does not comply with legal environmental standards and has failed to clean up leaked oil – or has done so only insufficiently, for decades. Moreover, Shell's own sustainability report stated that the number of leaks due to poor maintenance doubled in 2011, rising from 32 to 64.

[3] A TIMELINE OF THE COURT CASE is available at : http://www.milieudefensie.nl/publicaties/factsheets/timeline-courtcase-shell