This month, Zelena akcija/Friends of the Earth Croatia officially launched a campaign against oil drilling in the Adriatic together with civil society organisations within the national environmental network Green Forum, and in cooperation with Greenpeace Croatia and WWF Adria. The aim of the campaign S.O.S. Adriatic (S.O.S za Jadran) is to keep the entire Adriatic Sea oil free, not only by stopping the planned activities in Croatia and Montenegro, but also by ending existing oil production on the Italian side of the Adriatic. 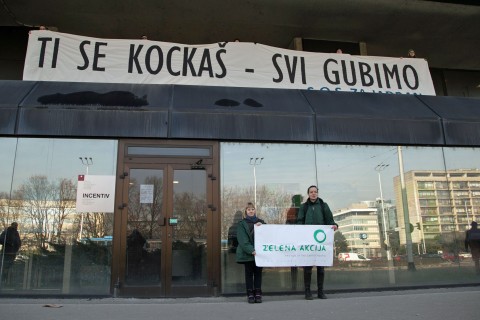 The Croatian government's plan to sign harmful contracts with five companies – Austrian OMV, American MarathonOil, Croatian-Hungarian company INA, Italian Eni and British Medoilgas – for oil and gas drilling in ten blocks of the Adriatic is unacceptable. The whole process so far has been untransparent and rushed.The companies were awarded concessions on January 2nd 2015 in a closed government session, without any prior public debate or thematic session in the parliament.

The Strategic Environmental Impacts Assessment, conducted over just three months, was published on January 16th, after the concessions had already been given, with. Its content has been called into serious question by many beyond civil society, including the Institute of Oceanography and Fisheries, local municipalities, and even some oil experts. 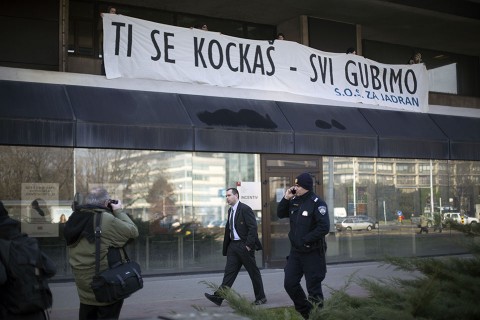 Zelena akcija's intention is to include more citizens' initiatives and CSOs into the campaign, and mobilise the wider public. The campaign has already organised several protest actions throughout the past year in front of relevant ministries and the government – on Friday 13th (February) our activists climbed the Ministry of Economy with a 10 metre long banner reading "you gamble, we all lose", while simultanous symbolic actions happened around the coast and islands.

People are starting to wake up and defend the Adriatic Sea - the only source of livelihood for many. There is a long fight ahead with pressure coming both from the government and the mainstream media. But this campaign has the potential to finally shake up Croatia and the Balkans, and get people to stand up to the dirty industry. For now, you can keep up to date with the campaign by liking S.O.S. Adriatic's new Facebook page (currently Croatian language only) and visit its website.