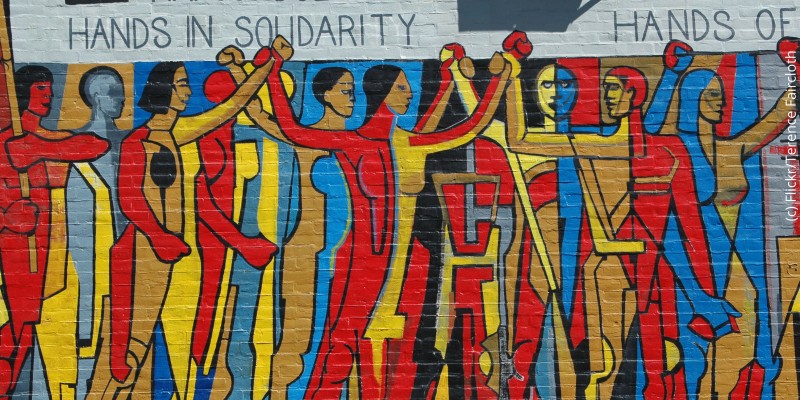 After the US election, we must fight the far right in Europe

We, at Friends of the Earth Europe, stand by our colleagues on the other side of the Atlantic in rejecting and fighting against the divisive, hateful rhetoric which was used during Donald Trump's election campaign. His chilling words on climate and evident thirst for fossil fuels have already caused a huge backlash from the environmental justice community and we support their upcoming struggle to protect vulnerable communities, the climate and the environment.

Trump tapped into a deep resentment about the governing establishment of both the Democratic and Republican Parties. He spoke using fear, suspicion, racism and hate to people who felt the government and the wider establishment had left them behind. In doing so, he built up and rode a fearmongering wave of racism, sexism, and xenophobia, exploiting people's basest instincts and fears with false promises of simple solutions.

We stand with all the LGBTQ people, people of colour, migrants, Muslims, women and everyone scapegoated and demeaned by his rhetoric and politics who will wake up today faced with their oppression legitimised by the state.

But this is not something that has suddenly appeared overnight, nor something that starts and ends at the US border. We cannot be blind to the same phenomenon which is increasingly present across Europe.

Racist, divisive and populist political movements are on the rise – far-right British politicians supported and advised Trump during his campaign, and their counterparts from the Netherlands and France applauded his campaign and victory. With a number of national elections coming up, we must resist and fight these movements at every opportunity to avoid Europe taking a similarly disastrous path.

As Erich Pica of Friends of the Earth US noted, "we reject the politics of fear utilized by Trump while recognizing that we must address the fundamental issues of equality, race and class that divide this country."

The same is true this side of the Atlantic. The fundamentals of what drove the US to this point must be tackled in the same way here: by healing divisions, calling out rhetoric and action that divides, stigmatises and oppresses, and pushing for a more equitable society built on justice, kindness and solidarity.

Meanwhile in the US, the environmental justice movement remains as strong as ever, and has vowed to fight Trump every step of the way.

Erich Pica continued, "Some things have not changed: we are a nation divided and half of this country is determined to continue the progressive fights it started. The People's Revolution, the Standing Rock Sioux, the Movement for Black Lives and Keep it in the Ground activists will not go gentle into the night. We will fight to protect our land, air, water and the people who depend on them for survival.

"The next four years will not be easy, but we have fought hostile administrations before. Under President George W. Bush, the environmental community took the battle to the courts and Congress and watchdogged political appointees; we blocked attacks on the environment; we galvanized the public to take action. After the more recent fights to kill the Keystone XL pipeline, ban fracking and shut down coal plants, the environmental movement is stronger than we have ever been."