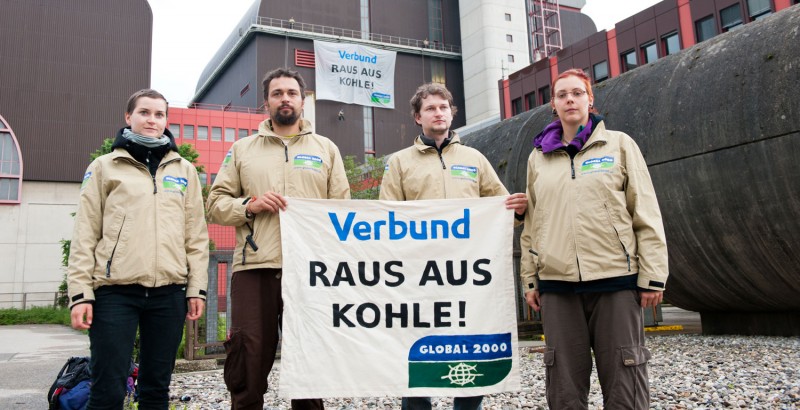 Friends of the Earth Austria/GLOBAL2000 today forced Verbund – the country’s largest electricity provider – to confront its continued burning of coal.

Activists arrived early in the morning to scale the company’s coal powered plant in Mellarch in the south of Austria and hang a 100 m2 banner reading “Verbund – get out of coal”.

The unveiling of the banner by the Austrian activists was in response to claims by Verbund that it produces 100% of its electricity from hydropower, while it persists in its use of one of Austria’s last few coal-fired plants.

Friends of the Earth Austria/GLOBAL2000  campaigner Johannes Wahlmüller said: "We are here to show that coal can't be our future. Verbund, the biggest Austrian electricity corporation, claims that 100% of the electricity it sells comes from hydropower and many customers believe this, even though Verbund is Austria’s biggest producer of electricity from coal. We demand that they shut down their coal power plants as it is the most CO2-intensive and unhealthy form of producing energy."

The action was part of Friends of the Earth Austria/GLOBAL2000‘s anti-coal campaign. The group has also launched a blog by ‘Melli’, a fictional coal power plant which wants to retire.

Coal is not only the dirtiest form of energy, but also the most harmful to health.

The phasing out of coal-fired electricity in Austria is possible. Verbund’s coal power plants at Mellach and Duernrohr burn 1.3 million tons of coal annually, generating emissions of 3.6 million tonnes of CO2. These are completely unnecessary: the coal power plant Mellach could be shut down immediately, as a replacement power plant has already been built.