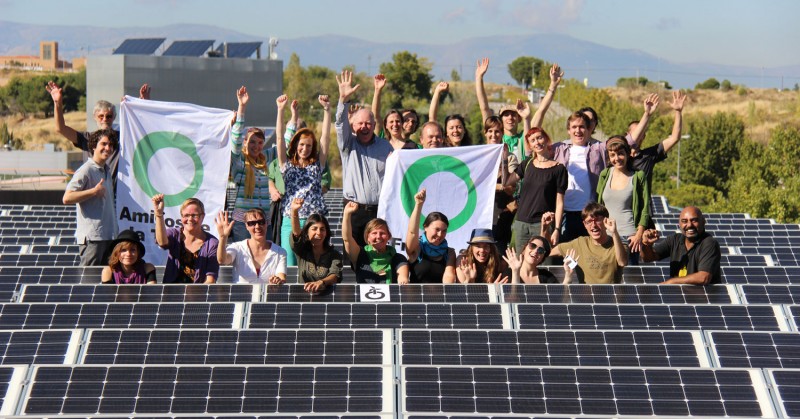 A community solar energy project in Sisante in Spain opened this month, in a positive step away from fossil fuels and towards community empowerment. The Huerta Solar Amigos de la Tierra facility is a joint venture between Friends of the Earth Spain and Ecooo. It allows local people to buy into the project and become co-owners of clean energy production.

Not only is the project a positive development in the fight against climate change, it also provides an opportunity at a time when much of Spain is still reeling from the economic downturn. Over four million people around the country live in energy poverty, and so the appeal of a new model of energy consumption where individuals may well save money on their bills is clear. At the very least, it will be no more expensive than the existing energy model.

Renewables are beginning to bloom in Spain, where 30 to 40 per cent of the national energy mix comes from renewables. Community-led projects are on the rise too. Ecooo has 65 community solar facilities around the country, while an increasing number of co-operative projects are networked at the national level: Som Energia provides renewable energy to 14,000 clients, and others such as Zencer are on the rise.

Challenges lie ahead. Many consumers remain reluctant about the idea of changing to new, community-led models of green energy. Meanwhile, the Spanish government has also been criticised for its unwillingness to invest in renewables. Yet, given the right conditions, there is cause for optimism.

Hector de Prado, head of energy and climate at Friends of the Earth Spain/Amigos de la Tierra, acknowledges this: “During the past century, individuals were considered to be mere energy consumers. Now, we have the chance to challenge this paradigm and reclaim a much more active role in the process. We want to work side-by-side with individuals and communities to let them achieve a prominent role in decision-making. The future of energy must be in the hands of the citizens."

Community energy projects exist in many forms right across Europe – from solar villages in Spain, to co-operative wind farms in Belgium, and community energy saving schemes in the Czech Republic – but they need more political attention and backing to fulfil their potential.

Friends of the EarthSpain/Amigos de la Tierra is part of the Community Power project which aims to put people at the heart of increased renewable energy in 12 European countries.