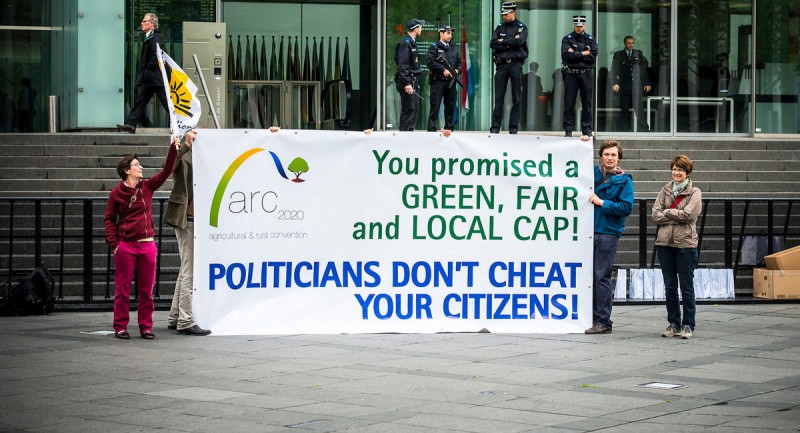 Movement for food sovereignty and ecological farming continues to grow

The EU's new agriculture policy is a disaster for the environment, small farmers and developing countries, according to Friends of the Earth Europe. The criticism comes at the end of lengthy negotiations over the rules and support for European farmers until 2020.

European politicians side-lined the 'greening' of the Common Agricultural Policy (CAP), according to the organisation, committing the majority of the vast 362.7 billion Euro budget towards support for industrial farming – benefitting multinationals and large-scale farms. This will devastate biodiversity and small farmers in Europe, whilst exploiting cheap raw materials in the Global South and dumping subsidised products in return.

Stanka Becheva, food and agriculture campaigner at Friends of the Earth Europe, said: "We urgently needed reform that ensured long-term food security, rural regeneration and the protection of our natural resources. Instead, the majority of subsidies will be used to prop-up a failing system that benefits a few multinationals and industrial-scale farms. This is a disaster for the environment, small farmers and developing countries."

Friends of the Earth Europe is critical of the following [1]:

Friends of the Earth Europe, alongside a growing citizen's movement, continue to build support for a food and farming system in Europe that allows communities to develop a diverse countryside, independent of agrichemicals and based on food sovereignty and agro-ecological farming.

Stanka Becheva continued: "Politicians have failed to grasp that we need to fundamentally change the way we produce and distribute food, and manage our landscapes. There is a growing movement of people who will continue to work together to ensure we have a viable and sustainable countryside producing quality food that benefits local communities."