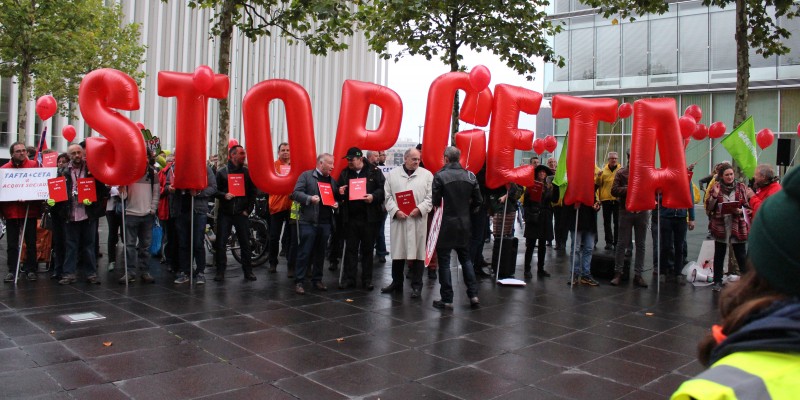 Luxembourg/Brussels, 18 October 2016 – Friends of the Earth Europe sees the lack of agreement on the Comprehensive and Economic Trade Agreement (CETA) as yet another sign that this trade deal should not pass. Two years after the negotiations ended, opposition is only getting stronger. Following Wallonia's continued refusal to support the deal at today's specially convened Council meeting of trade ministers, Paul de Clerck, economic justice programme coordinator at Friends of the Earth Europe said:

"CETA is hitting the rocks because it is bad trade deal that only favours corporations. The Walloon government's persistence in backing public concerns is exemplary and we strongly support its refusal to sign CETA. We need a new trade policy for Europe that takes people's concerns into account and contributes to a more sustainable and equitable world."

Friends of the Earth Europe together with other civil society organisations from Luxemburg and other EU countries protested outside the trade ministers Council meeting to reiterate their opposition to CETA.

Opposition to CETA and the proposed EU-US trade deal TTIP has reached unprecedented levels with hundreds of thousands of people taking to the streets in cities across the EU, over 3.5 million people signing a petition against the deals and over 2,000 local governments raising concerns.

Friends of the Earth Europe is calling for a new EU trade policy that addresses today's global emergencies such as cutting inequalities, halting the collapse of biodiversity and preventing climate change.