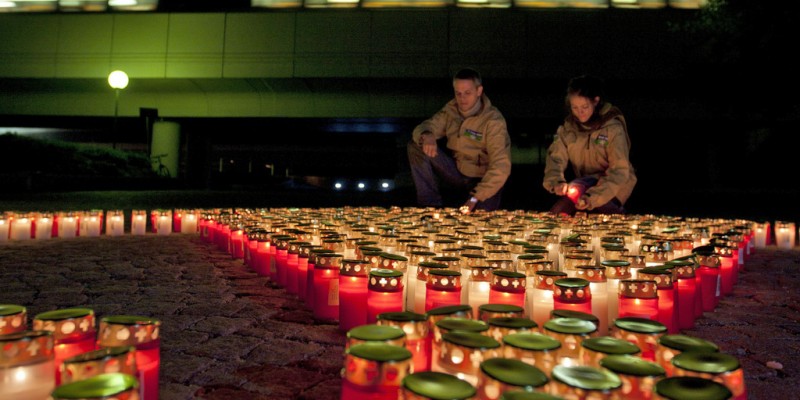 On the 26th anniversary of the Chernobyl nuclear disaster, Friends of the Earth Europe stands in solidarity with the people of Ukraine and neighbouring countries, remembering those affected by the catastrophe.

For many people the consequences of Chernobyl are still a reality, and nuclear power remains more than ever a threat to people and planet. But, resistance against nuclear power continues to grow across Europe, while genuine solutions, such as renewables and energy efficiency, gain ever more prominence.

Today, Friends of the Earth Austria launch their European Citizens' Initiative ‘My Voice Against Nuclear’. We aim to mobilise one million people across Europe against nuclear power, demanding that the European Commission deliver an energy system based on the only safe and secure form of energy – that which harnesses clean, renewable resources, or the energy we save through increased energy efficiency.

We conducted the interviews below with Reinhard Uhrig, an anti-nuclear campaigner for Friends of the Earth Austria who is launching the initiative ‘My Voice Against Nuclear’ today, and Pavlo Khazan, campaign director for climate change and energy at Friends of the Earth Ukraine. Both talk about mobilisations against nuclear power in Europe, hopes for a future beyond the nuclear age, and what we can learn from the past, on the 26th anniversary of Chernobyl.

Thank you for your time Reinhard and Pavlo. So, why is Chernobyl still important?

PK: Chernobyl was the worst nuclear accident ever seen. It is not just an historical event from a moment in time 26 years ago, it is still having a massive impact in the Ukraine today, and the number of people who get sick and die because of the radiation from Chernobyl is still rising. Only 26 years later do we start to realise the true impact of a nuclear accident.

This is a pivotal moment in the future of nuclear power – as the current generation of nuclear plants near the end of their lives, we have the opportunity to reassess the human price we are ready to pay for electricity produced in this way. Serious nuclear accidents took place before Chernobyl, they happened last year in Fukusima. Nuclear power is a terrible mistake.

RU: Austria had a massive share of the Chernobyl fallout and ranks ninth in terms of total fallout. 83 % of Austria’s surface area was contaminated, 13% to very high levels, second in proportion only to Belarus. 26 years on, Chernobyl still haunts us – last year we randomly tested Austrian wild boar for radioactive contamination and found them to be way above European and national limits.

What are you doing today for the anniversary of Chernobyl?

PK: We are calling on the Ukrainian government to immediately stop the lifespan extension of nuclear reactors. We demand an end to the development of the nuclear industry (including the new reactors Khmelnitsky and Rivnee NPPs) and the nuclear cycle in the Ukraine.

RU: Last night we lit 2,000 candles, forming a large radioactive sign, in front of the International Atomic Energy Agency in Vienna. Today, we launched the website for our European Citizens’ Initiative ‘My Voice Against Nuclear’: www.my-voice.eu. This is an opportunity for citizens across Europe to have their voice heard, and to call on the European Commission to deliver an energy system based on renewable and energy efficiency.

Reinhard, why a European Citizens' Initiative (ECI) now, and why is it significant?

RU: Following the Fukushima disaster in Japan, European citizens have shown increasingly strong opposition to nuclear power. The majority of people in almost all European countries were opposed to nuclear power before Fukushima, but now they’re saying they’ve had enough. We don’t need it and can do without it – with renewable energy sources and by being more efficient with our energy. This is an opportunity for European citizens to have their voice heard.

The ECI will bring together Friends of the Earth and anti-nuclear organisations from 12 countries, and will strengthen the anti-nuclear movement across Europe. Furthermore, if we can achieve one million signatures within 12 months, the European Commission will have to come up with serious answers to our demands.

Pavlo, what are the sentiments towards nuclear power in Ukraine? Has it changed over the last 26 years?

PK: Chernobyl brought into our lives new terminology like ‘liquidators’ and ‘children of Chernobyl’. But, the Ukrainian Government is still developing nuclear power in Ukraine. They don’t want to understand that nuclear energy is the most expensive way of producing energy, and when something goes wrong we put our environment at risk and pay with our lives and the lives of our children. We do not have to rely on this high risk technology when safe, clean and sustainable alternatives exist.

The history of the green movement in Ukraine began with Chernobyl, but now we can see the decrease of social involvement and public participation in different sectors, also in the environmental sector. This is connected with the decrease in democratic processes in Ukrainian society – we’re returning to Soviet style management in the government.

The Ukrainian Parliament recently adopted a law which suggests the construction of a nuclear storage warehouse near its capital city Kiev. The accompanying notes to this law are being kept secret. Moreover, the rights of the victims of the Chernobyl disaster are being violated – national authorities have refused to fulfil the social obligations established by the Ukrainian and international legislation, including guarantees for financial compensations.

Pavlo, do you have any message for national and European decision-makers in Europe?

PK: I’d ask that they declassify the information regarding the new nuclear waste storage law that is being processed in the Ukrainian government at the moment. The government of Ukraine must also renew the social guarantees and compensation for the victims of the Chernobyl disaster. We believe that the world should be nuclear-free. We would like to urge all counties to respect their citizen’s right to live in a healthy and safe environment. They must listen to opinions and voices of the society and start investing in renewables and energy efficiency.

Reinhard - What can people look forward to from the ECI, and how can they get involved?

RU: This is a chance to join forces, show that there are solutions to nuclear power and the energy crisis, and put an end to the nuclear age. Sign up at www.my-voice.eu to receive all the updates on the campaign.