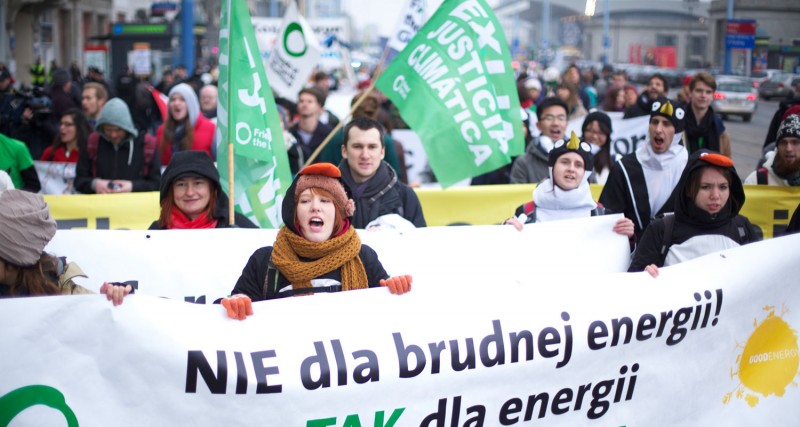 Thousands of people marched in central Warsaw today, under the banner of 'System change, not climate change', with a strong call from Friends of the Earth Europe to move the climate talks towards an equitable, ambitious and people-centred solution to the climate crisis. The march brought the first week of the international climate talks in Poland to a close.

The week began with a global outpouring of solidarity for victims and survivors of the typhoon Haiyan in the Philippines in Warsaw. However, some rich industrialised countries continue to put the profits of those responsible for the climate crisis, dirty energy companies, before the interests of people, according to Friends of the Earth Europe. The Australian and Japanese governments have weakened their carbon emission targets and continue to actively block attempts to provide financial assistance to people impacted by climate change.

Susann Scherbarth, climate justice and energy campaigner, Friends of the Earth Europe said: "In the Philippines they're counting their dead, but some at these negotiations are just counting their cash. Rich developed countries need to take responsibility for their role in causing climate change – this means ambitious emission cuts, and financial support and compensation for those who stand to lose so much from the impacts of climate change worldwide."

Friends of the Earth Europe is calling on European politicians to act as an example, and to push for fast and fair emission cuts in line with science, and a renewable energy future that is community-orientated.

Susann Scherbarth, climate justice and energy campaigner, Friends of the Earth Europe said: "The EU should not just criticise climate laggards, but act as an example and commit to ambitious action, now. This includes binding climate and energy targets for 2030, at least 60% cuts in greenhouse gas emissions and ambitious energy efficiency and renewables targets."

The second week of the talks needs to draw up a robust mechanism to compensate those communities and countries that will suffer irreversible loses due to climate breakdown, in the form of financial assistance to developing countries, so they can adapt to the impacts of climate change, tackle urgent development needs, and compensate for irreversible losses as a result of climate breakdown. This needs to be complimented with ambitious emission reduction targets, according to Friends of the Earth Europe.