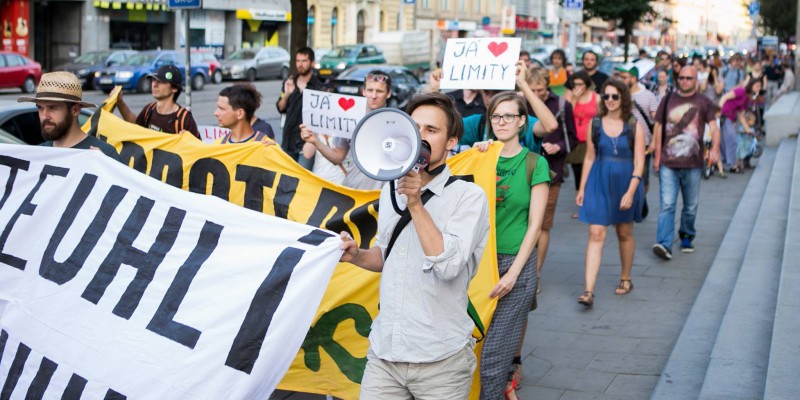 We are the limits! Anti-coal protests across Czech Republic

On June 11, more than 1,100 people gathered in 21 cities across the Czech republic to protest the Czech government's decision to break its promises to limit coal mining in North Bohemia.

Citizens from aross the Czech Republic are mobilising to protest the government's plan to break its long-held promise not to expand coal mining in North Bohemia, with the futures of two small cities in the north of the country at stake.

In 1991, the Czech government established limits on coal mining in North Bohemia, and promised that they would never repeal them. Recently, the minister of market and industry, Jan Mládek, has re-opened the discussion of limits with a view to expanding coal development in north Bohemia. If his proposals are accepted, the two small cities of Horní Jiřetín and Černice will be destroyed. Since the 1960s, nearly 80 towns in the region have been destroyed because of coal mining.

Hnutí Duha/Friends of the Earth Czech Republic, Greenpeace Czech Republic and the Czech Green party have organised under the banner Limity jsme my – we are the limits. Their anti-coal day of action on Thursday June 11th demonstrated local solidarity across the country with people in coal-threatened communities who fear for their future.

The biggest demonstration was held in Prague, where activists satirised the process by dressing up like miners and demonstrating for the demolition of the famous Saint Ludmila church. That evening, more than 200 people gathered to express solidarity with people affected by coal mining.

A strong message was also sent to the Czech government from Brno, Litvínov and Most. In Brno, more than 120 people marched across the city with anti-coal banners, while in Litvínov, another town close to the proposed new coal mines, more than 150 people made a human chain around the St. Archangel Michael church.

The old historical town of Most was destroyed for coal development by the early 1980s, and rebuilt as a series of prefabricated houses nearby. Almost one hundred people gathered to remember the old town.

Video: the old historical town of Most is destroyed for coal mining

The campaign has also taken off on social media, with activists from around the world showing solidarity with the hashtag #LimityJsmeMy.

The Czech government will likely make its decision on whether to push ahead with new coal mines in September.

We are the limits! Anti-coal campaign page (in Czech)