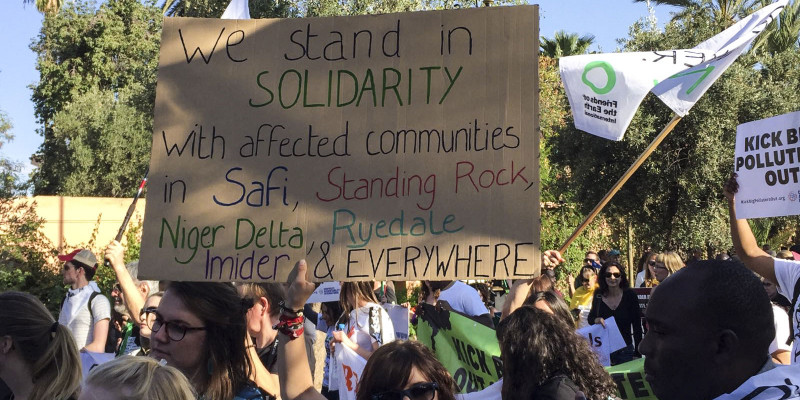 What COP22 in Marrakech must deliver for people and the planet

As we go into the second week of COP22, Friends of the Earth International asserts that Marrakech must deliver concrete actions for the sake of people and the planet.

Yesterday, Friends of the Earth International marched on the streets of Marrakech, with people from Morocco and all over the world. We stand in solidarity with impacted peoples, from the communities of Imider and Safi facing pollution and repression here in Morocco, to those in the Niger Delta and indigenous water defenders at Standing Rock.

This week, at the COP22, world leaders and Ministers will arrive to mark the Paris Agreement and a series of High Level Ministerials will be held.

"The first week of COP22 saw developed countries not honouring what they agreed to in Paris last year", said Meena Raman of Friends of the Earth Malaysia and Third World Network. "We saw developed countries trying to push mitigation-centric outcomes under the Paris Agreement and not even recognising adaptation or finance with high priority", she added. "They are also ignoring the urgent need of pre-2020 action on emissions reductions as well as finance."

"There is a critical need to ramp up pre-2020 emissions reductions especially by developed countries, whose low Paris pledges will lead us to a 3.5°C world which is a death trap for Africa and island nations among others", said Asad Rehman from Friends of the Earth International. "We also demand that the High Level Ministerial address the huge climate finance gap because finance needs to be the key to energy transformation in developing countries", he added.

"Marrakech is an energy COP, an action COP. Marrakech's legacy for Africa must be that it sparks the energy transformation in this continent, said Kwami Kpondzo of Friends of the Earth Africa. "The
numbers are shocking. Out of the 1.2 billion people in the world without access to electricity, half of them, 620 million people live right here in Africa", he continued.

"Initiatives like the African-led African Renewable Energy Initiative (AREI) are promising, and socially-controlled renewable energy must be the future of this continent and of the world, not dirty and harmful energy."

Photo gallery from COP22 in Marrakesh - Friends of the Earth International