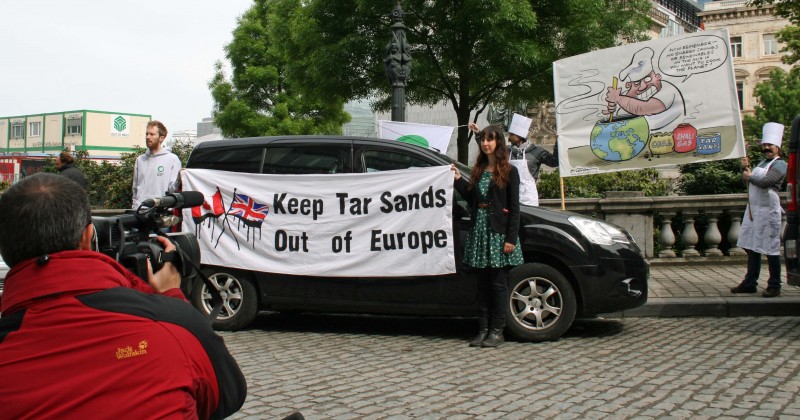 Canada's attempts to bully Europe into accepting oil from its highly polluting tar sands continued today when Canadian Minister of Environment Peter Kent made a speech in Brussels.

Anti-tar sands campaigners from Friends of the Earth Europe and the UK Tar Sands Network were present outside the event. Dressed as chefs, they brought the message 'Don't cook the planet' and distributed materials about the harm caused by tar sands and Canada's record on climate change.

The Canadian government has engaged in intense lobbying and done everything in its power to undermine and delay the Fuel Quality Directive, in possibly the most vociferous public relations campaign by a foreign government ever witnessed in the EU. 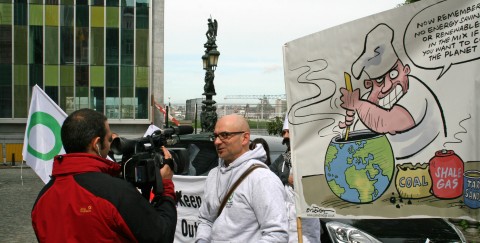 Emissions from tar sands are on average 23% higher than for conventional oil.

Darek Urbaniak, from Friends of the Earth Europe, said "This is yet another attempt by Canada to undermine the EU's efforts to fight climate change. Tar sands are the most climate hostile transport fuel in commercial production today.

"European governments must defy pressure from Canada, and say no to tar sands. High polluting sources of fuels, such as tar sands, must be cleaned up or kept out of Europe – they are the dirtiest source of transport fuels, and will undermine Europe's ability to reach its climate ambitions."

Minister Kent was speaking at the Centre for European Policy Studies where he defended the tar sands.