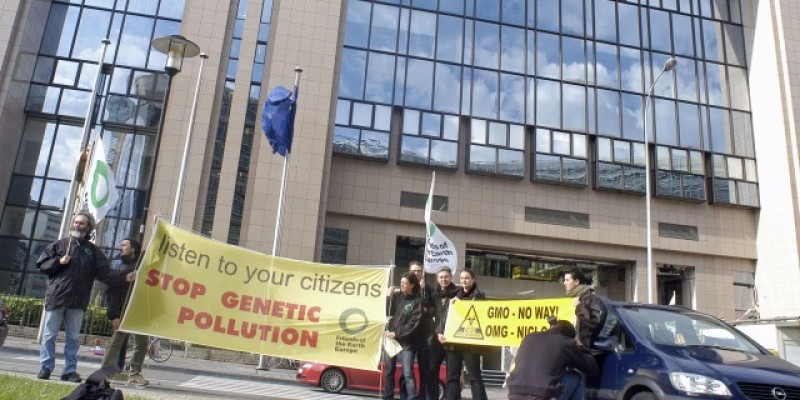 The European Food Safety Authority has started an investigation into the safety of growing genetically modified (GM) maize in Europe following the publication of the biggest study on maize pollen published to date. Friends of the Earth Europe and Testbiotech have called on the EU to immediately suspend the growing of GM maize and to stop all future approvals.

The European Commission, under pressure from the biotech industry, is understood to be imminently considering a second GM maize crop permitted for cultivation. Friends of the Earth Europe and Testbiotech have written to the new EU food safety Commissioner Andriukaitis calling for him to halt all cultivation of GM maize.

The European Food Safety Authority, in a letter dated 16 December 2014, announced a new investigation into the safety of all GM maize types currently being grown in Europe, or in the pipeline to be grown. They claim these new safety tests will be complete by 31 May 2015.

The researchers, from Germany, collected data and monitored over a 10-year period how far maize pollen can travel. Currently, European Food Safety Authority suggests buffer distances of 20 to 30 metres between GM maize and protected nature sites. The new research finds that maize pollen in fact travels up to several kilometres. To protect sensitive species, such as butterflies and moths, from the insecticide-containing GM pollen, the buffer distances need to be in the "kilometre range", according to the study. It concludes that, "previous risk assessments and conclusions regarding distances, potential exposure, and effects on non-target organisms should be revised in the light of these findings".

Mute Schimpf, food campaigner for Friends of the Earth Europe said: "This new research raises serious questions about our scientific understanding of the safety of GM maize and the harm it can do to nature and conventional farming. These findings show we need a root-and-branch reform of the safety checks in place for GM maize.

"It is clear from this new research that it is nearly impossible to grow GM maize without widespread damage to nature, as well as the contamination of farms producing clean conventional and organic foods. The only logical and scientific conclusion is to halt the cultivation of all GM maize in Europe."

Christoph Then, director of Testbiotech said: "This research again shows major gaps in risk assessment of EFSA. Crucial data are missing and replaced by unreasoned assumptions. Based on the risk assessment of EFSA, genetically engineered maize such the so-called '1507' cannot be regarded as safe for the environment. The Commission should stop the authorisation process."