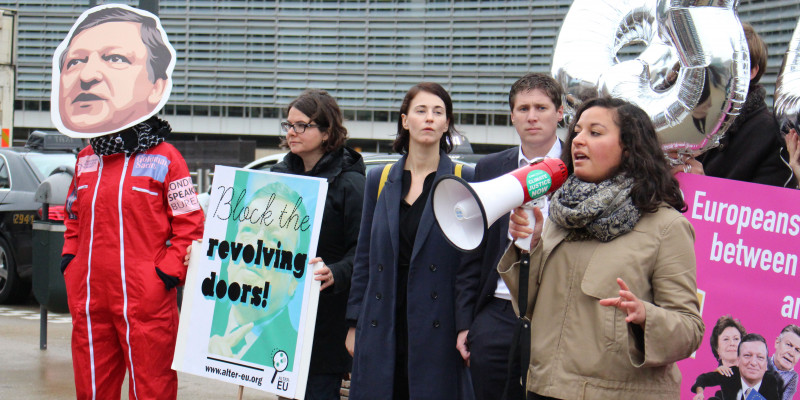 Today, the European Ombudsman issued a damning critique of the systemic problems in the Commission's handling of ex-Commission President Barroso's revolving door move to Goldman Sachs International. The Ombudsman's recommendations take up the concerns that the Alliance for Lobbying Transparency and Ethics Regulation in the EU (ALTER-EU) raised in a complaint submitted in March 2017.

Margarida Silva from ALTER-EU member group Corporate Europe Observatory said: "The Commission bungled the assessment of Barroso's move to Goldman Sachs from the start and we welcome today's opinion from the Ombudsman. The ex-President's passage through the revolving door into the corporate world and the Commission's subsequent handling of this have exemplified all that is wrong with the current ethics approach at the institution: weak rules, an ethics committee with no real powers and too many insiders, and insufficient implementation of the Treaty obligations. Such a clear-cut opinion from the Ombudsman must result in a comprehensive reform."

The Ombudsman recommends that the Commission refer Barroso's role with the investment bank once more to the ethics committee in light of his October 2017 meeting with Commission Vice-President Katainen at which they discussed "trade and defence", as highlighted by ALTER-EU. After Barroso was hired by the investment bank in 2016, he made a commitment not to lobby the Commission on behalf of Goldman Sachs. The Commission's ad-hoc ethics committee at the time concluded that this commitment sufficiently responded to the duty of integrity and discretion imposed by the EU Treaty, and that no further action was required.

We have also asked the Commission to consider requiring that its former President abstain from lobbying the Commission for a further number of years. You can find our recommendation in full here: https://t.co/7XtORc0VJP pic.twitter.com/HhJFUHEXxW

Myriam Douo from ALTER-EU member group Friends of the Earth Europe said: "The Ombudsman's recognition that Barroso's 2017 meeting with Katainen is a breach of his commitment not to lobby is crucial. Barrosogate is a shocking example of how the revolving door between politics and business works. Barroso is an EU insider that has uniquely privileged access to policy-making, which undermines democracy and feeds distrust in European institutions. We fully support her call that it should lead to a full ethical re-assessment of his job with Goldman Sachs. It also shows the need for longer lobbying bans."

In its original complaint to the Ombudsman, ALTER-EU argued that the Commission had failed in its obligation to uphold Article 245 of Treaty on the Functioning of the EU, on the integrity and discretion of Commissioners. The Ombudsman's opinion published today finds the Commission guilty of "maladministration" because it avoided taking a formal decision about Barroso's employment at Goldman Sachs.

Margarida Silva added: "The Ombudsman's suggestions for further revisions of the ethics rules follow the comprehensive recommendations from MEPs and civil society. The Commission must now get down off its high horse, stop dismissing its critics, and introduce substantial reforms – before the next tranche of Commissioners leave office in 2019."

The Commission's recent makeover of its Code of Conduct for Commissioners has failed to address these issues.