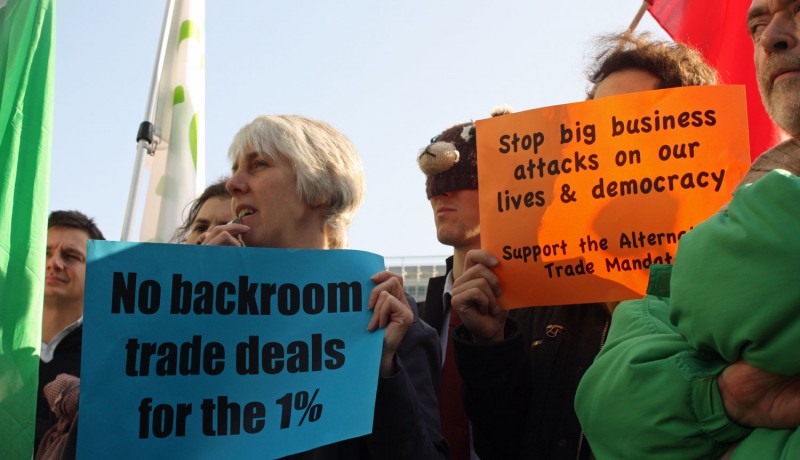 As US President Obama makes his first visit to Brussels and the EU institutions today, Friends of the Earth is demanding that environmental and health protection is put top of the agenda on both continents.

Friends of the Earth Europe and Friends of the Earth US are highly concerned that an EU-US trade deal will undermine democracy, and safeguards that protect people and the environment. Powerful multinationals, including agri-business, are currently lobbying for the deal to lead to weaker safeguards, under the guise of 'regulatory coherence', on issues related to food and chemical safety, and GM crops.

Commenting on EU-US trade negotiations, Magda Stoczkiewicz, director of Friends of the Earth Europe said: "EU and US leaders may be trading away environmental and health safeguards for the sake of big business and short-sighted interests. The trade talks could even hamper the ability of governments to protect their citizens against the risks of shale gas, GM crops and dangerous food and chemicals."

Energy will also be one of today's topics. The two groups are calling on Obama to block Keystone XL, and for President Barroso to implement the EU's Fuel Quality Directive (FQD) with a specific value for tar sands – to prevent tar sands from flooding the US and European markets. Tar sands, one of the dirtiest fossil fuels in commercial production, would undermine European climate policies on transport fuels. Concerns remain that the FQD is being weakened by the trade talks [1] – its implementation has already been delayed and it has disappeared from the EU's future climate plans.

"The fossil fuel industry and its shills are willing to exploit any crisis and go to any lengths in their effort to extract more dirty fuels and dismantle critical climate policies," said Erich Pica, President of Friends of the Earth - US. "Rather than promoting dirty fossil fuels like tar sands and fracked natural gas, Obama and Barroso should be doing everything they can to keep these fuels in the ground and help avert climate catastrophe."

On the agenda is how the US and the EU can contribute to reaching an international climate agreement in Paris in 2015. But the EU's proposals for climate and energy targets for 2030 – the 'EU 2030 package' – are already dangerously inadequate according to the organisations. Last week hundreds gathered in Brussels to reject and to decry the close relationship between European Commission officials and business lobbyists and the failure to bring the urgent transition to safe and green energy.

Magda Stoczkiewicz, continued: "Under the guise of promoting jobs, growth and energy security, the US and EU leaders are pushing a corporate-driven agenda of dirty energy and deregulation – instead of genuine solutions like energy efficiency and community-owned renewables."

[1] Powerful business lobby groups have urged the US government to include the FQD in the TTIP discussions, confirmed by the US Trade Representative Michael Froman. Recent delays in implementing the FQD were hailed as a success by the big business lobby group US Chamber of Commerce.