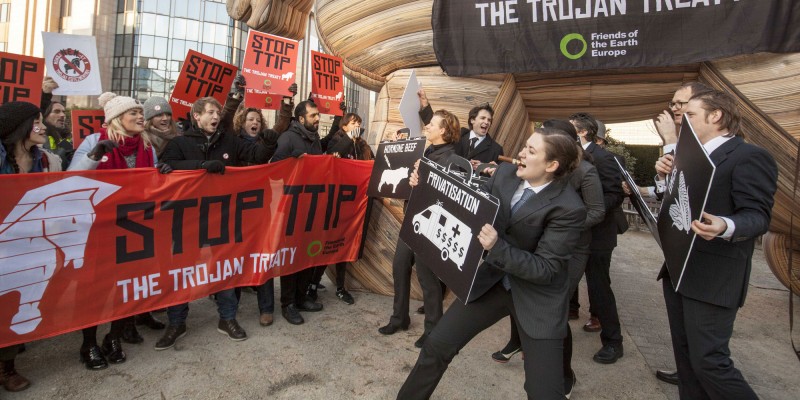 Plans to create more compatible rules between the EU and the US on chemicals, food, public services, workplace health and safety, and financial regulation as part of EU-US trade talks (TTIP) are a threat to democracy and an attempt to put the interests of big business before the protection of citizens, workers, and the environment, according to over 100 civil society groups.

In a statement released today the groups, including trade unions, social movements and non-government organisations from 19 European countries, warn about the dangers of the 'regulatory cooperation' chapter of the Transatlantic Trade and Investment Partnership – the latest round of talks about the deal is taking place in Brussels this week.

The organisations have joined a call spearheaded by campaign groups Corporate Europe Observatory, Friends of the Earth Europe and Lobbycontrol for the European Commission to cut the chapter out of the negotiations, saying the EU side had capitulated to demands from business lobby groups to "essentially co-write regulation".

Today's call comes after fresh leaks from the European Commission revealed proposals that would lead to the weakening of standards deemed detrimental to trade and investment before democratically elected bodies would have a say over them.

Paul de Clerck from Friends of the Earth Europe said: "The proposal on Regulatory Cooperation can only result in weakening or stopping public interest standards as they will have to be 'trade and investment' proof. It provides business with the ultimate tool to stop new policies or regulations that affects their profits. It gives enormous power to a group of unelected official and side-lines democratically elected parliaments".

Lora Verheecke from Corporate Europe Observatory said: "This TTIP chapter would constrain democratic decision-making by strengthening the influence of big business over regulation and giving US and EU businesses an even greater say on laws in Brussels, EU capitals, Washington DC, and in US states."

Max Bank from LobbyControl said: "It is not acceptable that Trade Commissioner Malmström continues to ignore civil society's critical voices on TTIP. Like Investor State Dispute Settlement (ISDS), regulatory cooperation strengthens big businesses power and threatens democracy on both sides of the Atlantic."