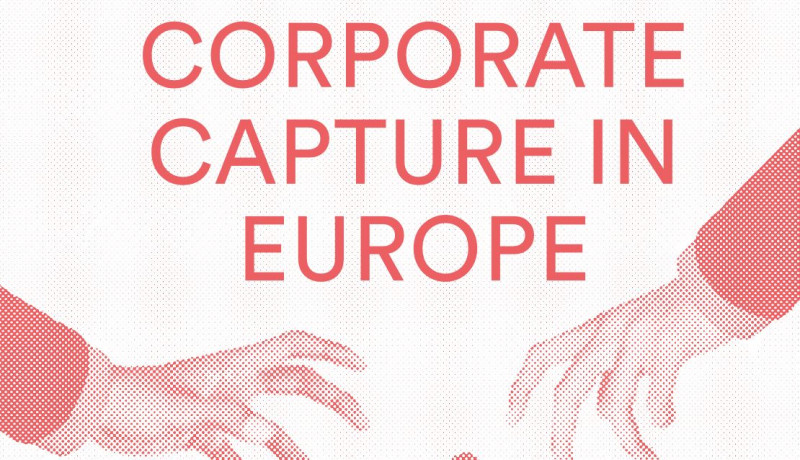 Excessive corporate influence over policy-making remains a serious threat to the public interest across Europe and at the EU level, warns a new report published today by the Alliance for Lobbying Transparency and Ethics Regulation in the EU (ALTER-EU).

Whether avoiding regulation or increasing public funding for corporate activities: lobbying; the revolving door between business and politics; strategic pitches of corporate 'expertise'; as well as privileged access to decision-makers and corporations' threats to leverage their structural economic power continue to be highly effective tools used by big business to ensure decision-makers prioritise the profit interests of corporations over vital public needs.

The report includes eight case studies from the EU level and member states showing where the influence of corporations has been so extensive that it constitutes corporate capture. The cases have been investigated and written by NGOs and researchers around Europe. They touch upon various areas of policy-making, including:

ALTER-EU coordinator Claudio Cesarano said "Dieselgate and the failure to regulate the financial industry after the crash have clearly shown that the influence of big business often goes beyond simple lobbying, either actively or passively aided by decision-makers. This is an extreme but unfortunately common threat to the public interest, social security, the environment and public health."

Myriam Douo, campaigner for ALTER-EU member organisation Friends of the Earth Europe said "Corporate capture is dangerous for our society. Its devastating consequences can be seen in many different policy areas. Threatening EU standards on public health and the environment through trade agreements, by allowing corporations to avoid paying fair taxes and by exposing citizens to more extreme risks from the financial sector. All of this because corporate profits have been prioritized over the public interest."

Nina Katzemich, campaigner for ALTER-EU member organisation Lobbycontrol, added: "The EU Parliament elections are around the corner, so it's a very good time to put the fight against excessive corporate power firmly on the political agenda. More transparency and stricter ethics rules are important but ultimately, we need a radical change in the way policy-makers at all levels interact with businesses. The needs and demands of citizens must take absolute priority."