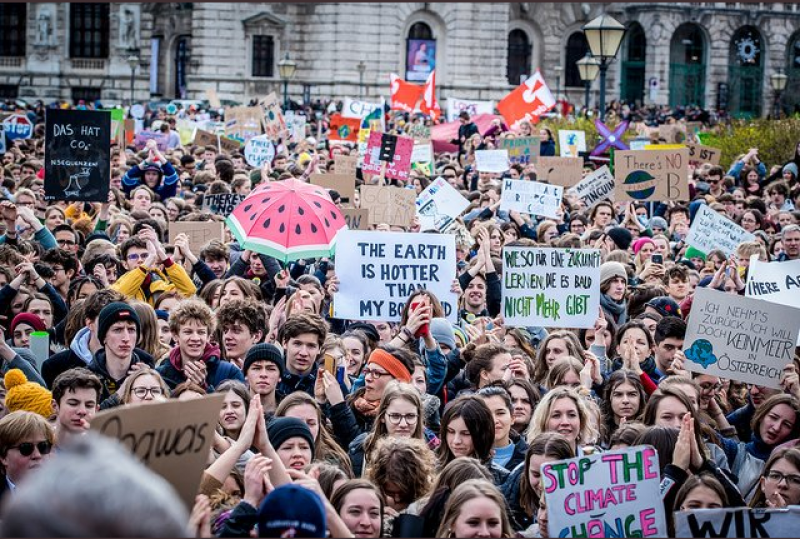 On Friday, March 15th, youth has written history. Inspired by 16-year-old Greta Thunberg - now nominated for a Nobel Peace Prize -, students have kicked off a #FridaysForFuture as a global movement, lighting a beacon of hope in times of climate crisis. More than 1.5 million students skipped school all around the world to protest against politicians' inaction on climate change in a 24-hour action that will mark a whole generation. From Australia to Asia, Africa, America, and Europe, young people took the streets on 2.068 protests in more than 125 countries demanding immediate change to their governments' climate policy. Despite their anger and disappointment about adults' inaction, it was a powerful message of hope and enthusiasm to fight for a greener social and economic system that allows us to halt catastrophic climate change.

A second Global Strike for Future is already scheduled for May 24th2019.

BUND/Friends of the Earth Germany

Friends of the Earth Ireland

Friends of the Earth Ireland encouraged the newly formed Schools Climate Action Network to retain the energy generated on Friday. They also set up a solidarity action for the 15th rather than bringing lots of adults to the children's rally, supported a lobbying workshop for students and brought them to their 2-days event 'Climate Connects'.

Amigos de la Tierra helped to spread out the call for the over 60 mobilisations that took place across Spain as an organisation but also took part in the event as concerned individuals. Four local groups were directly involved, helping mainly with logistics and communications.

Hnutí DUHA were directly involved in the Climate Coalition, connecting them with national media. A group of active volunteers was also a part of the march, which gathered 2000 students in Prague and 700 in Brno, and organised a workshop for making banners.

Focus/Friends of the Earth Slovenia

Focus offered the strikers a space for meetings, provided expert support in shaping demands and backgrounds, materials for protest, and covered costs for leaflets and posters. They promoted the event through their channels, including their newsletter, and gave social media support. They participated in the protests, but without exposing banners.

Latvijas Zemes draugu promoted the event and supported the main organisers with logistics.

Friends of the Earth Scotland

Friends of the Earth England, Wales, and Northern Ireland

Friends of the Earth EWNI supported mainly behind the scenes, although they also published an open letter to national media (The Times) signed by 33 green and youth NGOs, academics and public figures in favour of the strike. They provided welfare staff in 4-5 locations where this was requested, plus input on safeguarding (child protection) for adult supporters. They produced a guide for adult allies in partnership with UK student climate change network, and one of their youth project students did some citizen journalism on Twitter and Instagram.

Today’s youth strike for climate in Manchester was inspiring to say the least. Great to see such a large turn out - hi @theresa_may#youthstrike4climate #FridaysForFuture @GretaThunberg
(Photography credit to @/eodee.photography on Instagram) pic.twitter.com/kF6swLHYUB