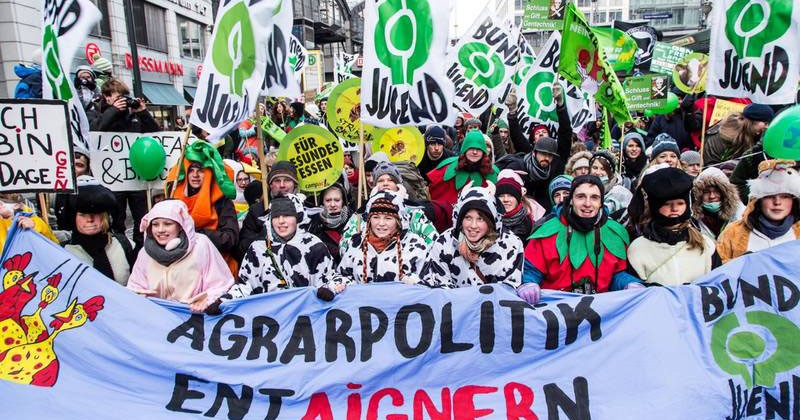 25,000 people descended on Berlin today calling for the German government to fundamentally reform its agricultural policy.

Activists from Friends of the Earth Germany / BUND, with farmers, bee-keepers and consumers, marched from Berlin’s central station, through the government district and to the Federal Chancellery building under the banner: “We're tired! Good food. Good Agriculture. Now!” This is the third year in a row that protests demanding fundamental agricultural reforms have taken place in the German capital during the ‘International Green Week’ – the world’s largest agricultural fair.

Participants, many in imaginative costumes, were calling for changes to agricultural policies that would promote animal welfare, protect biodiversity, lessen farming’s contributions to climate change and prevent factory farms pushing small farmers out of business. The German government was urged not to put the interests of industry first, but the interests of consumers, farmers, animals and the environment. Banners carried slogans criticising factory farms, dangerous pesticide use, and the negative impacts of domestic agricultural policy on countries in the global South.

Hubert Weiger, chairman of Friends of the Earth Germany / BUND, in his speech to the chancellor's office at the end of the mass demonstration, said: “Hopefully, Chancellor Angela Merkel won’t restrict her tour of Green Week to the Potemkin villages that the agricultural industry has erected. Hidden behind each of these pleasant tradeshow stands are millions of animals suffering an exorbitant use of antibiotics and fattening, as well as enormous pressures on the environment from factory farming.

"New guidelines for agricultural policy in Germany and the European Union are long overdue. The federal government, with Chancellor Merkel and Agriculture Minister Ilse Aigner, has to finally ensure that small farms are encouraged instead of factory farms.”

The protests were also part of the on-going Good Food, Good Farming campaign, an initiative of farmers, consumers and environmental activists from across Europe calling for reforms to the European Union’s Common Agricultural Policy.