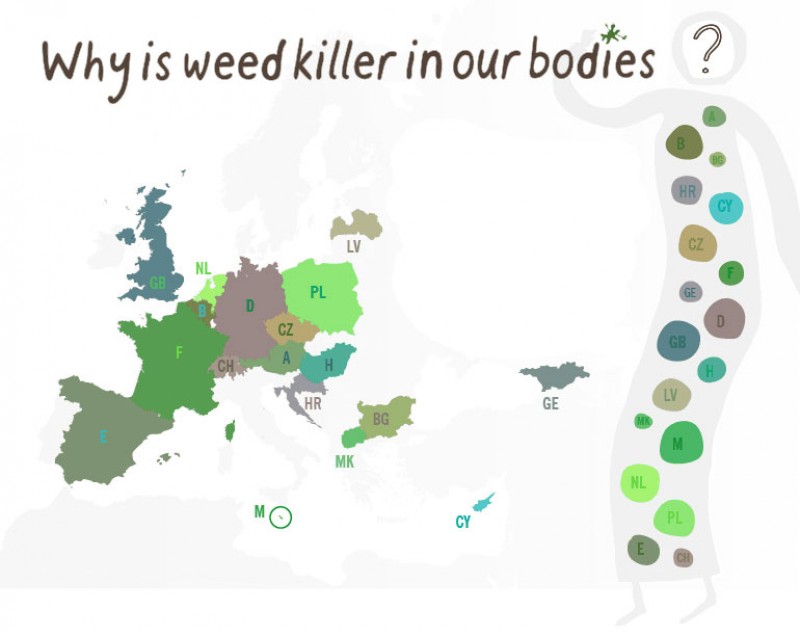 Glyphosate is the world's best-selling weed killer and one of the most widely used herbicides in Europe. It is used extensively in farming, in parks and public spaces, on railway lines and in gardens. It is also crucial for growing genetically modified (GM) crops, many of which are modified to withstand glyphosate.

Where is glyphosate used?

Glyphosate is widely used by farmers to clear weeds from fields before planting, or before seeds have germinated. It is also sometimes sprayed on to cereal crops, oilseed rape, maize and sunflowers ahead of harvesting to dry out the crops. This is known as desiccation. Glyphosate is the most commonly used herbicide on UK arable farms, and is used on 39% of agricultural land in Germany.

Outside of Europe, glyphosate is also used for GM crops, with some 85% of GM crops modified to resist this herbicide. Evidence shows that the use of glyphosate, as well as other herbicides, increases dramatically if Roundup resistant GM crops are grown.

There is currently very little testing for glyphosate by public authorities, despite its widespread use. Authorities in Europe do not test for glyphosate in humans, and tests on food are infrequent.

Because of this lack of public data, Friends of the Earth Europe tested urine samples from volunteers in 18 countries across Europe between March and May 2013. The results showed traces of glyphosate in samples from all countries. Glyphosate residues were detected in the urine of 44% percent of people tested.

This has raised serious concerns about the presence of glyphosate in the human body, as well as questions about exposure to the other chemicals used with glyphosate.

Friends of the Earth wants to know where this glyphosate has come from and what it is doing to our bodies and to the wider environment. We want to know why governments are not monitoring for glyphosate exposure. Why isn't our food routinely tested to ensure that it does not contain glyphosate? What steps, if any, are being taken to reduce our exposure?

Friends of the Earth Europe's demands

Friends of the Earth believes that there is sufficient evidence suggesting environmental and health impacts from glyphosate to warrant concern. Given our test results have shown that glyphosate is present in humans, we want to know how the glyphosate found in human urine samples has entered the body and what the impacts of persistent exposure to low levels of glyphosate might be. What happens to the glyphosate that remains in the body?

Friends of the Earth demands that: