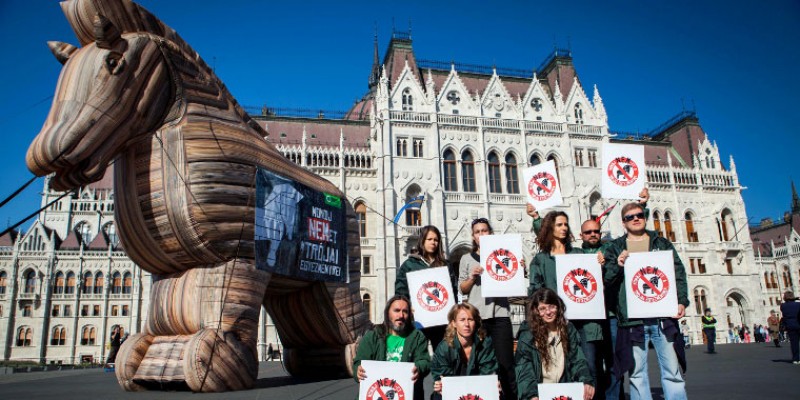 After two months, three countries and nine cities the giant Trojan horse that is touring Europe has already raised awareness among thousands of people of the dangers of the proposed EU-US trade deal.

With actions in cities across Hungary, Germany and Denmark, Friends of the Earth groups have used the Trojan horse to engage and mobilise citizens against the trade deal, which would put corporate interests over the needs of people and the planet.

Under the deal – known as TTIP or the Trans-Atlantic Trade and Investment Partnership - food standards could be weakened, EU climate policy is already being negotiated away, and corporations could be legally allowed to sue governments for introducing regulatory changes to benefit their citizens. And all this is being agreed under a veil of secrecy.

The 'Trojan treaty' tour started on September 9 in Copenhagen, where NOAH/Friends of the Earth Denmark brought the horse to three very different areas of the city to warn, inform, and discuss the risks of the trade deal with citizens and politicians. The first day saw the horse at a people's kitchen in Nørrebrohallen. Around 500 people attending an eco-dinner were shocked that they hadn't heard about the treaty, and interested to know more. 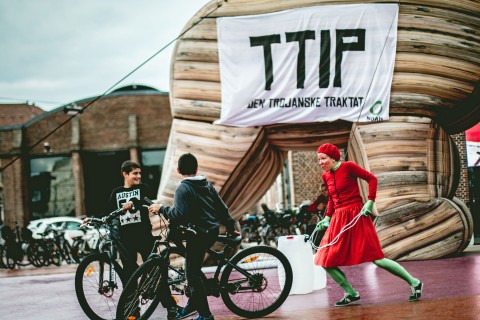 Next, NOAH took the horse to Strøget, the main shopping area in Copenhagen There was still an overwhelmingly consistent response from Danish society - surprise and amazement at the horse and the hidden dangers of the trade deal it represents.

Many of those who stopped were shocked by the lack of media attention that the issue was receiving in Denmark. The sense of being in the dark about the process and worried about what the deal implied was summed up by one passer-by, who remarked, "We are going to vote on this, aren't we?"

The final stop in Copenhagen was in front of the Danish parliament – the Folketinget. Danish MP Per Clausen from Enhedslisten (the Red and Green Alliance) was very much in agreement with NOAH's concerns, but said there is an uphill battle to be fought to get the issue on the agenda in Denmark. 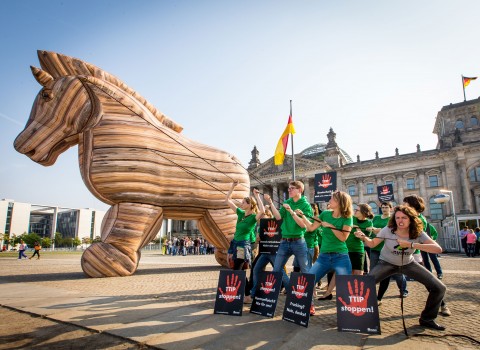 Next stop: Berlin. BUND/Friends of the Earth Germany positioned the giant horse in front of famous landmarks. With stops outside the Brandenburg Gate and the Reichstag, they were able to attract a good deal of press attention.

The horse continued its journey to Hungary. Five cities in Hungary were visited throughout September – Budapest, Győr, Szeged, Miskolc and Nyiregyhaza. Magyar Természetvédok Szövetsége/Friends of the Earth Hungary took the horse, and their message of putting citizens ahead of corporate interests, to all corners of the country.

For its final two engagements of 2014, the Trojan horse was back in Germany. On the Europe-wide TTIP Day of Action on October 11, it appeared in Hamburg, where it reached over 2,000 citizens, many of whom had never participated in a demonstration before. Finally in Dresden on November 6, around 40 volunteers and activists were out in force, helping collect over 200 signatures for the Europe-wide 'Stop TTIP' citizens petition, including one well-known German comedian. 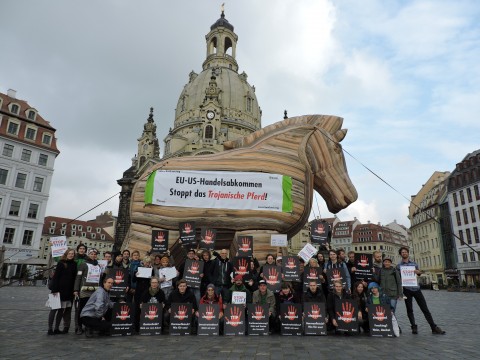 One of the issues that has consistently shocked passersby in all three countries has been the proposal to include in the deal powers that would allow corporations to sue governments for loss of profits, were governments to change national laws – even for the public good. This 'Investor-State Dispute Settlement' (ISDS) is proving an increasingly thorny issue in negotiations, as popular opinion around the EU begins to swell against it.

Natacha Cingotti, corporate campaigner at Friends of the Earth Europe, said: "The proposal to include special rights for corporations in the EU-US trade deal is perhaps the most blatant illustration of the corporate agenda driving these negotiations. In a recent public consultation, citizens expressed their overwhelming rejection of any such VIP treatment for corporations which would allow them to undermine important social, health, or environment standards. It is high time for the European Commission to listen to the public and come clean about what is being put on the negotiation table. A first step should be to drop this harmful investor provision in the EU-US trade negotiations as well as in other trade agreements."

In July, more than 150,000 people responded to an EU consultation on whether ISDS should be included in an EU-US trade agreement – the highest response ever for such a consultation. The European Commission is currently analyzing the responses and its official response is expected in early 2015 at the latest.

The 'Trojan treaty' tour now takes a winter break. In the new year, the Trojan horse will resume its travels with stops planned in the Netherlands, Belgium, Spain, and ore countries.

For more on the Trojan horse tour, see its Storify page.

The Trojan horse tour on Storify