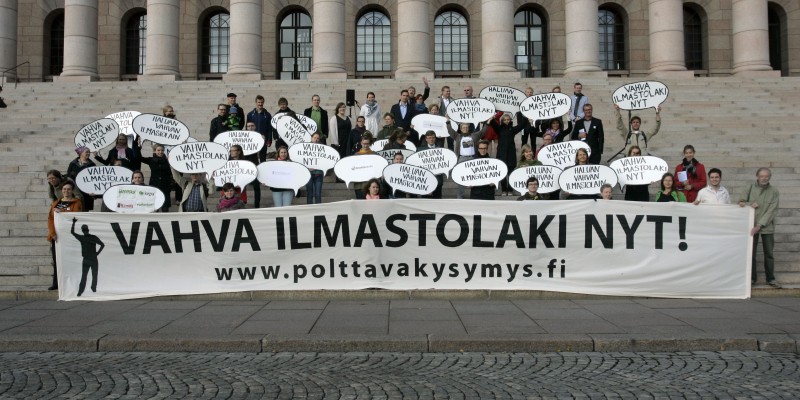 The Finnish parliament today approved after voting a new climate bill that commits to 80% emissions reductions by 2050, in one of the most ambitious climate laws passed to date across Europe.

The approval comes after long-term campaigning from Maan ystävät / Friends of the Earth Finland, who, through the Big Ask Finland campaign, has put pressure on the Finnish government to  "save them from climate catastrophe".

"This is a great victory for the Big Ask Finland campaign, which is now the most successful climate campaign in Finnish history. People, most of whom are volunteers, have been incredibly committed since 2008, and have made the law passed today possible. It is a great victory also for Finnish climate policy which now begins a whole new era with legally binding targets and a more open and efficient planning and monitoring system. The climate law is a great tool to at least seriously try to avoid the climate catastrophe. I hope that other countries also will join us in passing this kind of these strong climate laws that we so desperately need." said Leena Kontinen, vice-chairperson of Friends of the Earth Finland.

Passed a week before the parliament dissolves for a general election, the bill commits Finland to 80% emissions reductions from 1990 levels by 2050. It includes the possibility for the revision of targets and plans according to the latest climate science, meaning that the target could well be increased.

Approved with strong support from both citizens and political parties across the board, it also contains a well-developed planning and monitoring system to ensure that steady progress is made along the way. The long-term plan would have to be approved at least once every ten years, while a separate medium-term plan exists to address emissions outside the EU emissions trading scheme such as transport, housing and agriculture. This will have to be approved once every election term, and the government will have to report on it annually.

The former Finnish Environment Minister Ville Niinistö said last year, "Through the Climate Change Act, Finland strives to be at the forefront of building a successful low-carbon society. The act merges ambitious climate policies with economic success and the improvement of well-being.

“Climate change and the efforts to mitigate it will change the world and human activities substantially in the coming decades."

Now is the time to celebrate but the climate work continues. In order to ensure that the law remains up to the scale of the climate challenge, Maan Ystävät is continuing to call for – amongst other measures – a 95% emissions reduction target for 2050.