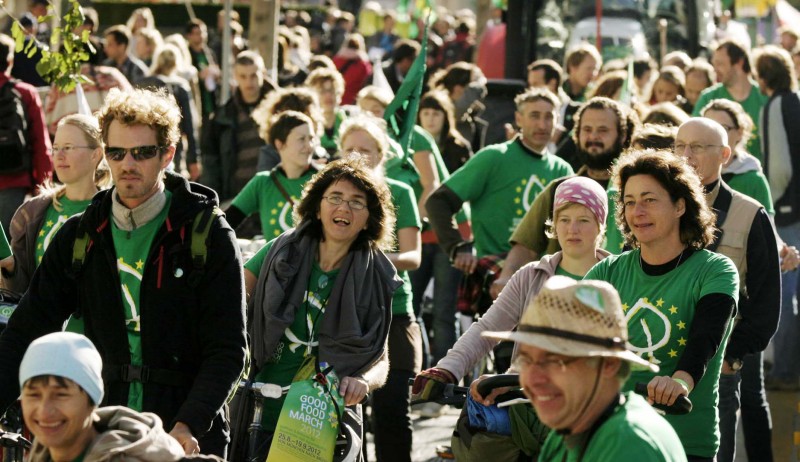 Hundreds of people gathered today in Brussels to call for radical changes to food and farming policy in Europe.

Farmers, citizens, and young people from more than 20 European countries took part in the final day of the Good Food March [1] and brought their demands for the future of the Common Agricultural Policy (CAP) directly to those responsible for its reform.

The CAP is currently being debated by decision-makers in Brussels, including, for the first time, the European Parliament.

For some the event marked the end of a long journey as they had been travelling for weeks to Brussels from  Austria, Germany, France, the Netherlands, and other parts of the EU by bike or tractor. [2]

Among other things, the Good Food March is calling for fairer and greener farming, an end to food speculation, support for sustainable family farms – especially organic farming, fair prices for farmers, a grassroots based rural development policy and increased cultivation of local protein crops – rather than importing soy to feed Europe's farm animals.

Geneviève Savigny, a farmer from France and a spokesperson for the European Coordination Via Campesina said: “The Good Food March is the biggest gathering of citizens calling for a radical change of direction in European food and farming policy in the last years. It has attracted people from across Europe, sending a very powerful message to decision-makers that people want a better CAP which ensures all farmers can stay in business and there is good food for all.”

The demonstrators also presented albums filled with one thousand messages to representatives of the European institutions. A photo campaign, which has allowed anyone to send a message to Brussels about the future they would like to see for food and farming,  resulted in over 1000 photographs with diverse and poignant wishes for the CAP reform being collected from all EU member states.

“We have travelled 900 kilometres from Munich to Brussels to say the time is right for a new policy so that we young farmers have a chance to supply the people in Europe with greener, better and fairer food. The European Parliament and European Commission must support good food and good farming, and put these ahead of the interests of the food-industry lobby,” said Regine Holloh, a young goat-farmer from Germany and organizer of the Good Food March, who had cycled all the way from Munich to Brussels.

Stephen Meredith, policy advisor at IFOAM EU Group added: “EU agriculture policy affects our environment and the social and economic future of farming and rural communities. We need real and meaningful change to respond to long-term sustainability challenges. The European Parliament must show leadership and ensure there is transparent and inclusive decision-making on the CAP which takes into account the opinions of all parliamentarians and all relevant Committees representing different, but equally important, perspectives.”

The Good Food March is the initiative of ARC2020, European Coordination Via Campesina, European Milk Board, Friends of the Earth Europe, IFOAM EU Group, Meine Landwirtschaft, Group PAC2013, and Slow Food. In total more than 100 organisations from 20 countries are involved.

[2] For details of some of the stories of individual participants see: www.goodfoodmarch.wordpress.com