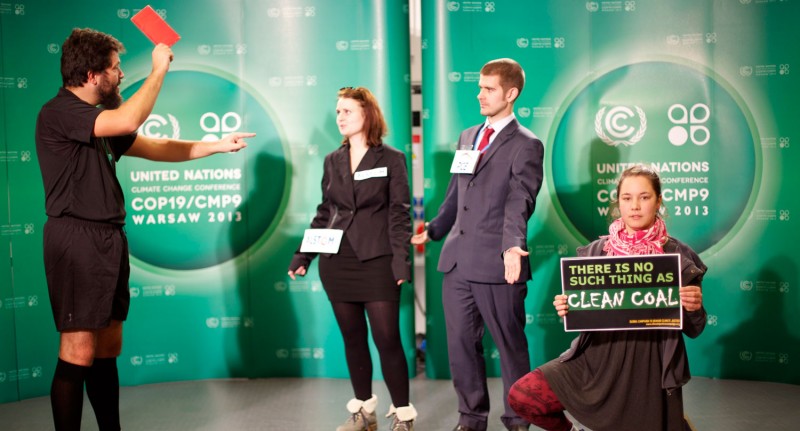 Kicking coal out of the climate talks

The decision by the Polish government to host the world coal summit at the same time as the international climate negotiations was met with protest today in Warsaw. Activists and campaigners from the European, International and youth networks of Friends of the Earth participated in a day of action against coal – telling decision-makers to kick coal and other dirty energy out of the climate talks in Warsaw.

A broad coalition of civil society groups, including Friends of the Earth Europe, released a people's declaration on coal, which called for a just transition away from coal in order to tackle the climate crisis. Friends of the Earth Europe highlighted the incompatibility of coal with the emissions reductions needed to avoid climate catastrophe, and challenged the corporate capture of the climate talks.

Susann Scherbarth, climate justice and energy campaigner, Friends of the Earth Europe said: "The Polish government is abusing its position to bring in unwanted guests to these climate talks. Dirty fuels, like coal, can't be allowed to pollute the fight against climate change – they're a death sentence for people and planet. Instead we need real climate solutions such as clean renewable energy that puts communities at its heart."

Young Friends of the Earth Europe, dressed as Polish politicians and Christiana Figueres, the UNFCCC Executive Secretary, tried to 'clean coal' outside the coal summit. They challenged industry greenwash on 'clean' coal and false solutions to the climate crisis like carbon capture and storage. Christiana Figueres spoke at the coal summit, rejecting calls from Friends of the Earth not to legitimise corporate-controlled dirty energy through her attendance.

Maruška Mileta, from Young Friends of the Earth Europe said: "The youth of today do not see coal playing any part in our future. Its hugely destructive impacts on climate, health and the environment mean that no amount of corporate sponsorship or lobbying can clean its image. We demand clean and renewable energy systems owned by people and communities."

The European Union needs to push for a robust mechanism to compensate those communities and countries that will suffer irreversible losses due to climate breakdown. This needs to be complimented with commitments to dedicated financial assistance to developing countries, so they can adapt to the impacts of climate change and tackle urgent development needs, according to Friends of the Earth Europe.

Solidarity continues for victims and survivors of the typhoon Haiyan in the Philippines. Members of the Friends of the Earth International delegation continue to fast alongside Yeb Sano, climate commissioner for the Philippines.