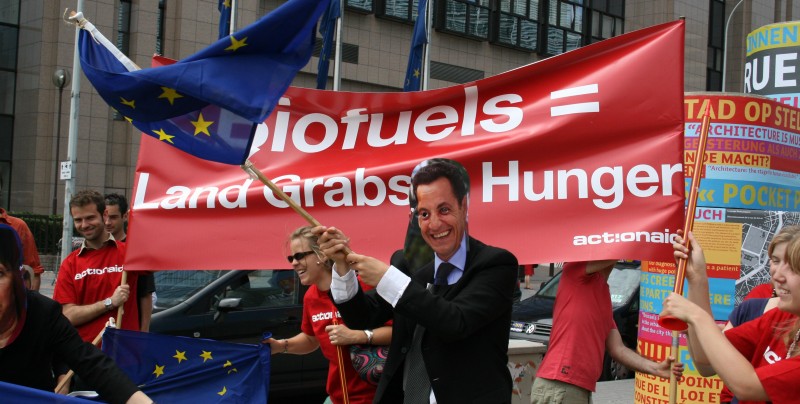 Europe is the second biggest consumer of land in the world after the USA. Europe consumes roughly 640 million hectares a year – an area equivalent to 1.5 times the size of Europe itself. Moreover, Europe is the continent most dependent on imported land – with roughly 58 percent of land consumed coming from outside Europe, mainly from China, the Russian Federation, Brazil and Argentina. Europe is extremely dependent on land from outside its boundaries to maintain its consumption levels - especially for commodities like soy, agrofuels, palm oil, sugar and cotton.

This increase in land demand is driving land-grabs and catastrophic deforestation, pushing up food prices, contributing to climate change and biodiversity loss, and exacerbating social inequalities.

Agrofuels (or biofuels) are particularly putting major and growing pressure on our land, food and forests, as well as damaging both people and planet. They are liquid fuels made from plant and biological material – often food crops such as soy, palm, rapeseed and sunflower oils, and maize, sugarcane, sugarbeet, and wheat. They can be 'dropped in' to the engines of our cars and airplanes and used the same as petrol and diesel.

Their large land footprint means they can worsen climate change, threaten people's food security and land grabs, and destroy forests and other crucial ecosystems. But their growing use is driven by high subsidies and targets.

Friends of the Earth Europe has campaigned to end "food for fuel" - providing food crops for a hungry world should take precedence over feeding Europe's cars and planes. We have exposed their real social and environmental costs, and campaigned for proper carbon accounting, and the scrapping of targets and subsidies for agrofuels in Europe.

Measuring global land demand is a crucial first step towards addressing these problems. Friends of the Earth Europe campaigns for the reduction of Europe's land footprint – the only way to start moving towards more sustainable ways of using such a finite resource.

We believe it's crucial that this land footprint indicator is integrated into overarching economic policies and impact assessments to ensure Europe gains the environmental, economic and social benefits of reducing pressure on the world's natural resources.

'Land grabbing' occurs when local communities and individuals lose access to land that they previously used, threatening their livelihoods. This land is acquired by outside private investors, companies, governments, and national elites. Communities and individuals can be poorly informed of the consequences, with little rights to stop the land acquisition. The land is then typically used for commodity crops, including agrofuels, sold on the overseas market to places like Europe.

Whether by force, intimidation, or deception, communities who lose access to their land are left without the means to sustain their livelihoods, ending up landless and dispossessed. Poor smallholders with insecure land tenure, pastoralists, and indigenous populations are particularly vulnerable. Land grabbing is often accompanied by severe environmental degradation, the destruction of healthy ecosystems, water, soil and air.

As the availability of fertile land and water is threatened by climate change, mismanagement, and consumption patterns, demand for land is increasing.

Over-consumption and corporate led production of commodity crops, such as palm oil, soy, and sugarcane are the main drivers of land grabs.

Food security concerns in some investor countries, with recent food price hikes, increasing urbanisation and changing food consumption, have made acquisition of foreign land an attractive investment. This is compounded by agrofuel targets – with huge swathes of land being grabbed in Africa.

Control of land resources is incentivised by carbon markets, including for projects in the UN Clean Development Mechanism (CDM). Land grabs are also driven by the extractive and tourism industries. The prospect of rising rates of return from agricultural commodities and from increases in land value boosts the attractiveness of agricultural land also as a speculative investment for rich individuals, large pension funds and state funds.

Foreign investment in farmland is frequently promoted by investors and host governments, under the guise of new technologies, jobs, and capital. In reality, land acquisitions frequently take place without the free prior and informed consent or consultation of the local communities concerned; often with no environmental or social impact assessments. Poor contracts are marred by a lack of transparency, safeguards, and monitoring; promises of jobs, schools and hospitals don't materialise.

Many land grabs deprive communities of land and create environmental problems through intensive agriculture and increased water demand. In the poorest countries, local smallholders forced to abandon their ancestral lands have to relocate, either to cities or clear forests or peat land to continue farming.

Europe's demand for ever-more resources, including agrofuels, is fuelling the destruction and depletion of nature and often leads to human rights violations.

Meanwhile concentrating foreign control over precious land, water and natural resources in turn facilitates the endless cycle of over-consumption, waste and inefficient resource use by the world's rich.

Friends of the Earth Europe calls on governments to fully enforce environmental and social impact assessments, legal liability, and free, prior and informed consent of communities.

We campaign to stop the drivers of land grabbing – calling for the scrapping of political targets for agrofuels – and for the reduction of Europe's land footprint. We campaign to protect the most vulnerable from the whims of Europe's big financial players. We promote the right to food and the principles of food sovereignty, with ecological agriculture that supports small farmers.