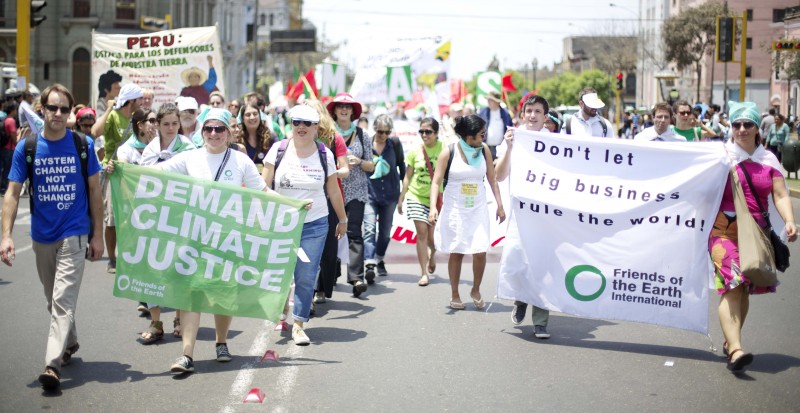 Today, on International Human Rights Day, Friends of the Earth joined thousands of people on the streets of Lima, Peru, where the United Nations climate talks are taking place, to highlight the injustice which links climate change and human rights.

In the biggest march in the country for many years, an estimated 15,000 people demonstrated jointly with human rights and environment defenders in the 'world march in defence of mother earth'.

Friends of the Earth is highly concerned that the countries and people who have contributed the least to greenhouse gas emissions will be the worst affected by the climate crisis. Yet governments are failing to make the progress urgently needed, or commit to do their fair share of action in a just, adequate agreement to combat climate change.

With only two scheduled days of negotiations left, there has been no measurable movement on emissions reductions targets or finance for climate adaptation and mitigation of the scale the urgent situations requires.

"The inaction of Europe and other rich countries responsible for climate change is outrageous. The European Union has come here to Lima claiming to have set very ambitious emission reduction, renewable energy and energy efficiency targets, but in reality they are far from what science and equity tell us is needed. Europe and other industrialised countries are at the root of climate injustice," said Susann Scherbarth, climate and energy campaigner for Friends of the Earth Europe.

"Historically responsible countries must be held accountable for the denial of the human rights of millions affected in vulnerable countries," said Ricardo Navarro, director of Friends of the Earth El Salvador.

"There is enough basis to assert that emission reduction and compensatory financing constitute human rights obligations, and that lack of remedial action by responsible countries would amount to a violation of human rights," he added.

Youth activists in Brussels also marked International Human Rights Day. With banners reading 'Climate change is a human rights issue' and 'Stop the Killings' they joined an action in solidarity with human rights defenders who are persecuted across the world. Sixty young people from 18 countries have come together in Brussels to follow the UN climate talks at Young Friends of the Earth Europe's 'Lima in Brussels' event.

Human rights activists who have been honoured today include Reuben Herrera from Guatemala – an activist supporting indigenous protests against huge energy and mining projects in Huehuetenago, a delegation of syndicalists fighting for workers' rights in the Philippines, and Huber Ballesteros from Colombia – a union leader who was one of hundreds imprisoned after a general strike in 2013.

"Human rights and environment defenders are heroes and should be honoured. As long as our governments fail to make meaningful commitments on climate change, these people – and more like them – will continue to take action to protect the future. Solutions to the climate crisis exist – we need a community-powered energy revolution and our governments have no excuses for blocking that," added Susann Scherbarth.

Climate change is having a disproportionately harsh impact on the least developed countries and particularly on marginalised communities, which do not have the ability to adapt to climate change. The areas worst affected by climate change are sub-Saharan Africa, the Pacific, and South Asia.

Extreme weather, droughts and flooding are expected to lead to even more loss of life, food and water shortages, destroyed or damaged livelihoods, poverty, and displacement.

The impact of climate change is most acutely felt by those whose rights protections are already precarious, including the poor, indigenous people, women and migrants. Climate change is lethal: floods, droughts, extreme weather, loss of biodiversity, desertification, sea-level rise, water scarcity are just some of the consequences of climate change.

The human cost is massive: an estimated 400,000 people already die each year due to hunger and diseases related to climate change, especially in developing countries, and the number of deaths increase as our carbon emissions increase.

There could be about 200 million climate refugees around the world by 2050, including 20 million displaced by rising sea levels, storm surges and cyclones in Bangladesh alone. Bangladesh is particularly vulnerable to climate change.

The United Nations talks in Lima are intended to lay the groundwork for a global agreement on greenhouse gas emission reductions, to be agreed in Paris next December. Friends of the Earth will be fighting until Paris and beyond for real action on climate change that is fair and equitable.