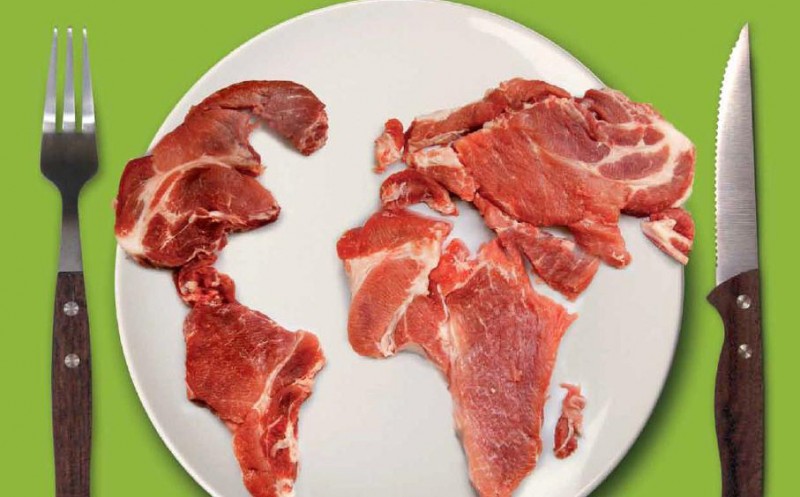 The average German consumes over 1,000 animals in their lifetime at a rate of 60kg of meat every year, according to figures released today by Friends of the Earth Germany/BUND.

The ‘Fleischatlas 2013’, a detailed ‘meat map’ report on the trends and consequences of European meat consumption, shows the average German consumes  4 cows, 4 sheep, 12 geese, 37 ducks, 46 pigs, 46 turkeys and 945 chickens in their lifetime. This consumption is over twice the meat-intake per person in developing and emerging economies, and over six times as much as in the world’s poorest countries.

The report produced with the Heinrich Boell Foundation and Le Monde Diplomatique, reveals that German farms produce around 17% more meat than is actually consumed, and that almost two-thirds of German agricultural land is used to produce feed for livestock.

Even though a lot of animal feed is grown domestically, Europe is also shown to be the world’s second-largest importer of soy beans, after China.  Around a third of the world’s land area is used to produce animal feed for meat, creating hardship for small-scale farmers in developing countries and devastating rainforests and similar sensitive habitats.

“The schnitzel on our plate is so often at the expense of food security of many people in the South” criticised Barbara Unmüßig, President of the Heinrich Böll Foundation. “We need a shift in agricultural policy. That is, emphasise subsidies for intensive meat production and prevent land-grabbing in the South to promote small-scale agriculture and the human right to food.”

The meat map also shows the high level of antibiotics used to maintain the health of the animals in the mass production of meat around the globe. Germany is estimated to use about 170 milligrams of antibiotics per kilogram of produced meat, one of the highest in global rankings. This results in an increase of antibiotic resistance, something 25,000 people per year die due to in Europe.

Current agricultural policy supports this level of mass-production, with the apparent cheapness of meat being ultimately misleading. “Germany seems to want to be world champion in exports in chickens and pigs,” said BUND chairman Hubert Weiger. “Consumers are charged once when purchasing meat, then with tax money for new farms and slaughterhouses, and thirdly for the environment and human health.”

Friends of the Earth Germany/BUND is campaigning with allies for the better allocation of €60 billion in EU subsidies to adhere to stringent environmental and animal welfare standards. “The federal government must show that it is the locomotive of EU agricultural reform and not the brakeman,” said Weiger.