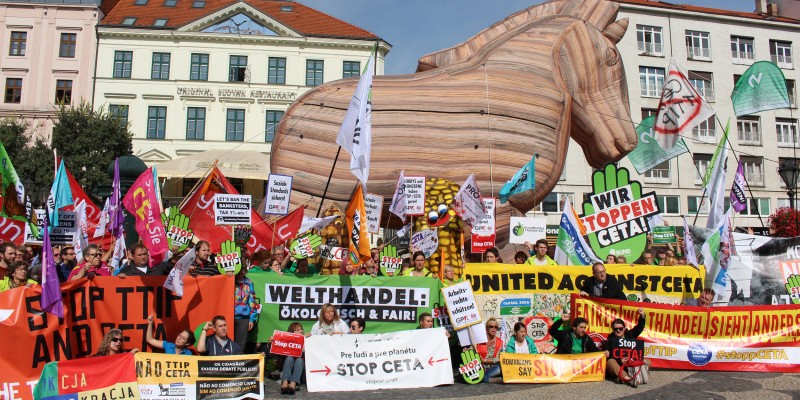 Commenting on the announcement that a special Council meeting will be convened in October with the aim of agreeing the controversial EU-Canada trade deal, Fabian Flues, trade campaigner at Friends of the Earth Europe said: "Public concerns cannot be swept away with a simple declaration added to CETA. The text of the agreement remains untouched and will give foreign companies special rights to sue our governments. This would hands over power to corporations, at the expense of people and the environment. Governments still have the opportunity to halt this harmful treaty and ensure that we have a trade system that addresses todays' global emergencies such as cutting inequalities, halting the collapse of biodiversity and preventing climate change."

Cecilia Malmström, the European Commissioner for Trade, and Peter Žiga, Minister of the Economy of the Slovak Republic announced at the press conference closing the informal council meeting of the trade ministers that there would be an extraordinary meeting of trade ministers organised on October the 18th where the ministers are expected to approve CETA. Meanwhile, Canada and the EU will work on a joint legally binding declaration meant at reassuring public concerns over the trade agreement.

In addition Cecilia Malmström and Peter Žiga have announced that the TTIP negotiations are going ahead as planned despite increasing public and political opposition.

Fabian Flues stated: "TTIP is virtually dead and remains on life support until after the US elections. It is time it was ended and buried for good.We need a new transparent European trade system that aims at halting climate change, biodiversity collapse and the gross inequalities that exist."

TTIP has been strongly criticised over the last month, especially in France, Germany and Austria. Both the French Secretary of State for Trade Matthias Fekl and the Austrian Economy Minister Reinhold Mitterlehner suggested that new TTIP negotiations should start under a new name after the U.S. elections in November.

Alongside the informal Council meeting, activists from 14 countries have gathered in Bratislava to show their opposition to CETA and TTIP, calling both of them Trojan Horse Treaties. On Friday morning, 300 protesters met on the square in front of the Philarmonie, the venue where the ministers were meeting.

More photos from the protest