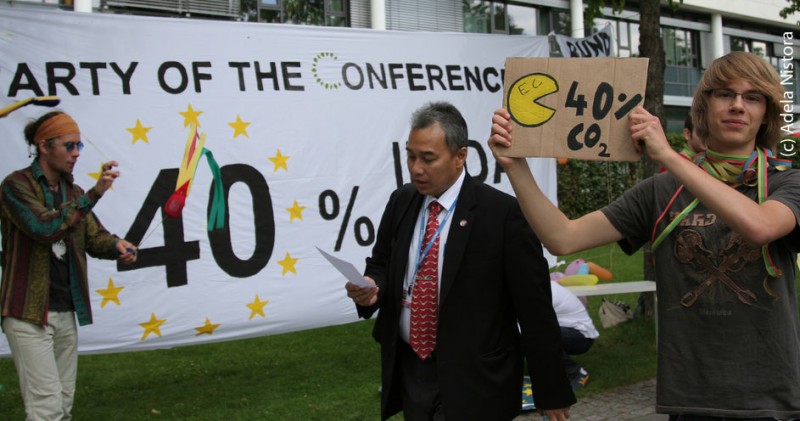 The climate change talks kick off in Bonn

Busy days at the UN climate negotiations, and YFoEE is here to remind delegations to the urgency for action and the principles of global equity and justice.

Here at the UN climate talks in Bonn, Germany, the first two days were incredibly busy for me. Things are happening very-very quickly even though these sessions are smaller than the ones called COPs (Conference of Parties), like the one in Durban we linked-up with from Brussels last December.

So what’s going on here now?

Despite financial difficulties, some people from the Young Friends of the Earth Europe network managed to come to Bonn. We have people from Norway, Germany and the UK and we are working together with youth delegates from all over the world – bringing the voice of future generations directly to government delegates.

This voice is incredibly important, as now there is a strong push from many rich developed countries to get developing countries to make similar levels of emission reductions. Of course it comes in a nice ‘package’ but actually it is a completely unfair attempt, as it undermines the main principles of the Convention. These principles are about the differentiated responsibilities between those who have emitted for over 100 years - causing climate change while becoming wealthy - and those who have just started embarking on the path of getting out of poverty in the last decade or so.

Together with the youth representatives here, we have worked on two very important speeches, one on the opening meeting of the Kyoto Protocol, and one on the opening of the Long-Term Cooperative Action working group. In both speeches youth emphasised the importance of respecting the principles of the Convention, calling for urgent emissions cuts by rich developed countries whilst providing assistance for developing countries to embark on a clean development path.

Read the youth Kyoto Protocol speech on the Earth in Brackets website.

Keeping the principles as a top priority

If the principles of the Convention get undermined this year, that will have a very significant impact on future negotiations and on the lives of hundreds of millions of young people living on the edge of the poverty line in countries like India or China.

The problem is rather the way rich countries are trying to avoid making real emission reductions. Moreover, they are trying to place the burden on developing countries instead.

One interesting quote from today's workshop on equity summarises the huge differences and differentiated responsibilities: "India will be required to peak its emissions by 2025 when its income per capita will be the same as the US in 1890" - Sivan Kartha PhD, Stockholm Environment Institute.

Even though many decision-makers from developed countries know what should be done, it just doesn’t happen for some hidden reason. Some people, or I'd rather say some 'entities' really don’t want to see this low-carbon development happen.

Who are these who don't want progress then?

Rich developed countries are locked in to one single giant’s hands, who doesn’t want to see any change from the way we produce energy: the dirty giant of fossil fuel industry.

Probably these negotiations would have had successful and meaningful outcomes years ago already, but the dirty industry is working hard from Brussels to Washington, spending huge amounts of cash on influencing decisions in their favour, which is solely about more profit via more pollution.

On the positive note, however, there is a Push Europe action being planned for the end of this week, to expose some of this 'invisible hands' working behind the curtains and putting billions of people at the risk of climate change....

More on this very soon!

Keep yourself involved by checking YFoEE's Facebook and checking my tweets from the conference centre.