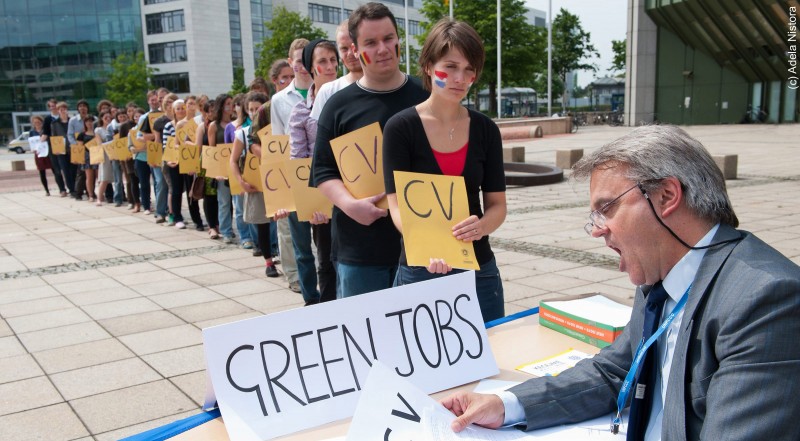 At the UNFCCC climate negotiations in Bonn

In June, where else would Young Friends of the Earth Europe be than in Bonn? Since 2009, YFoEE activists have been attending the two week mid-year round of UNFCCC climate negotiations in Bonn, always in preparation for the big UN climate change conferences at the end of the year. In December 2011, this big meeting will take place in Durban, South Africa.

During the talks in Bonn, YFoEE put pressure on the EU to raise its ambition in tackling climate change by strengthening its emissions reduction target. We demaned it show real leadership in the international climate negotiations in line with our Push Europe campaign.

We organised two colourful actions. One of them featured 27 young people representing each EU Member State queuing in front of an EU official's desk presenting their CVs asking for more opportunities for green jobs (a study of the Potsdam Institute has shown that a 30% EU emission reduction target could create 6 million additional jobs in Europe). The other action was a spoof street party in front of the UNFCCC conference venue.

YFoEE also co-organised a side event with BUNDjugend (YFoE Germany) and the UK Youth Climate Coalition (UKYCC) under the title "Moving the EU - Moving the World: youth led campaigns for climate justice" to discuss the EU's responsibility and how to pressure the EU to show more ambition in tackling climate change by raising its emission reduction target.

Two YFoEE activists were interviewed by FoE International's Real World Radio. They talked about the role of young people in the UNFCCC negotiations and their demands to political decision makers. They also spoke about the Push Europe campaign.

Following the Bonn meeting, YFoEE is now getting ready for our activities around the UN climate talks in Durban and we are busy organising our Durban in Brussels youth convergence