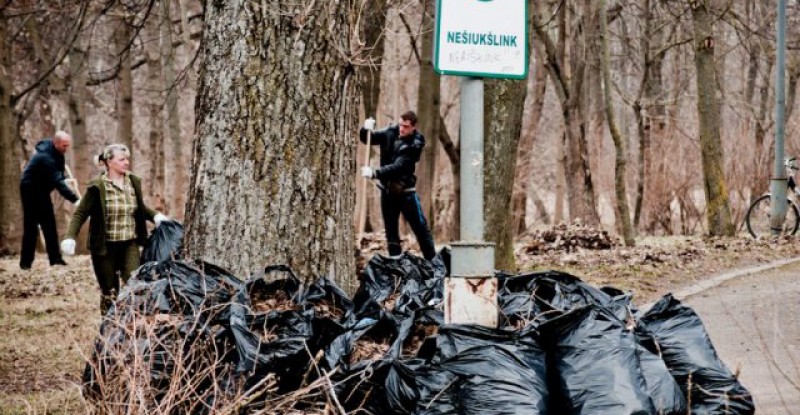 Young Friends of the Earth Lithuania’s nature clean up

Over 150,000 volunteers participated in this year's "Let's Do It 2011" action, for the fourth year running. What began in 2008 in Estonia, has now became a wide spread environmental and community building campaign not only in Lithuania, but around the globe (India, Romania, Slovenia, etc.).The aim of the action is to encourage people to voluntarily clean up garbage from parks, forests, beaches and public spaces in towns. This year the organisers on the national level came up with the idea not only to collect litter, i.e., remove it from people eyes, but to educate citizens to help reduce and recycle.

In the capital, Vilnius, people brought old mobile phones for repair and garbage was collected in three different coloured bags for plastic, glass and general.

YFoE Lithuania members were actively involved in an organising team with other local NGOs which meant setting up list of polluted points, coordinating volunteers' teams, mobilising people, fundraising, as well as doing communication work. This year we were picking not only garbage, but also putting up nesting-boxes for birds, organising environmental workshops and games involving both adults and youth. Though the weather was not welcoming, we managed to involve 3,000 people in our town! They were so enthusiastic so collecting garbage was fast and enjoyable. Our team was 'lucky' to get the most polluted spot where we collected 150 old tires and 2,500 litres of garbage. People, willing to start this action or get tips for organising similar activities, are more than welcome to contact zivile@zvejone.lt or to have a look on national website.