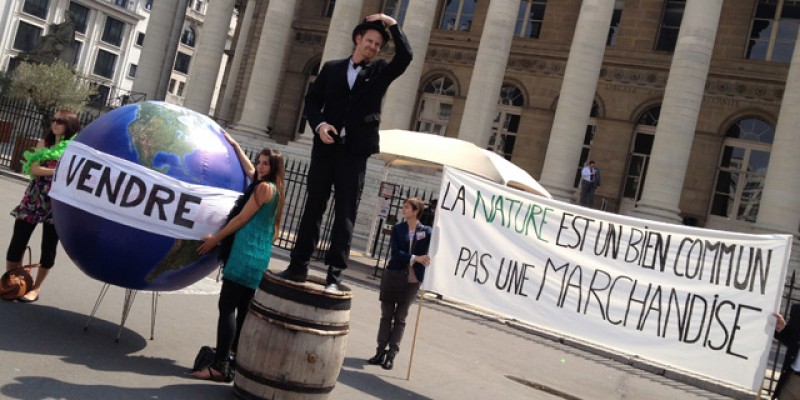 To mark the official start of the Rio +20 summit, campaigners from Friends of the Earth France/Les Amis de la Terre held an alternative people's summit in Paris, outside the stock exchange. The people's summit formed part of the Global Day of Action, and supported real social and ecological justice and opposed the commodification of nature. The event was held in solidarity with the thousands of people who marched for climate justice and against the 'green economy' today in Rio.

Campaigners organised an 'auction' of the earth and its natural resources to represent the transactions taking place between the World Bank, multinational corporations and banks who are bidding for control of the world's natural resources.

From Paris to Rio, the campaigners are denouncing the corporate solutions being proposed to the current global crises at the Rio+20 conference. In a context of extreme inequality and austerity, they are calling for a fundamental reduction in resource consumption, decent jobs, a farming policy that guarantees food sovereignty, and protection of natural resources such as water, soil and air, to ensure they neither become commodities nor financial assets that can be gambled upon.

Mobilisations are being organised around the world, with actions in France being held in Paris, Bayonne, Lille, Limoges. More than 600 activities are planned in June, in the run up to and during the Rio+20 talks. The actions will highlight issues of social and environmental justice, defence of the commons against the financialization of nature, food sovereignty, energy and mining, labour and the economy.