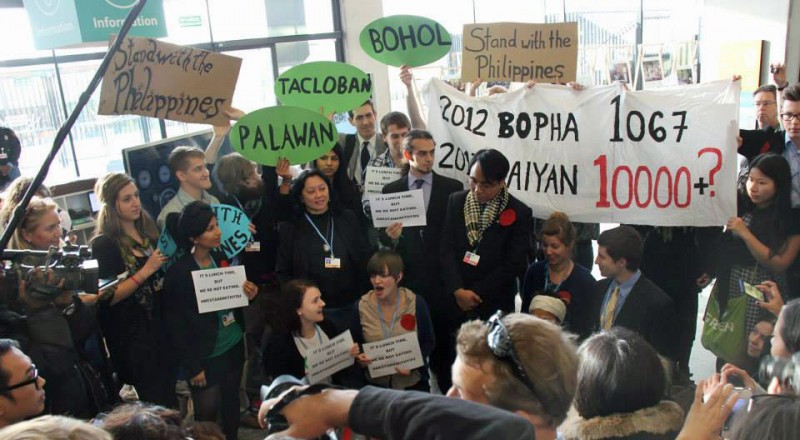 An estimated 2,000 people are feared to have been killed in the fierce typhoon that hit the Philippines on Friday. Hundreds of thousands have been displaced and as many as 10 million affected.

As government negotiators meet in Poland for the international climate summit, members of Friends of the Earth from across the global federation showed solidarity for the victims and survivors of the typhoon, and called for urgent and just action to avert the worst consequences of climate change.

The typhoon should serve as another reminder that the world is on a precipice. From flooding to hurricanes to droughts and food shortages, the impacts of climate change are becoming more frequent and devastating day by day. It is indigenous and rural peoples, like many of the victims in the Philippines, who are the most vulnerable to climate change, and the least responsible for it.

Magda Stoczkiewicz, director of Friends of the Earth Europe said: "As the climate talks open, the Philippines are counting the victims of typhoon Haiyan. The future of climate change predicted by scientists is already here. Our thoughts are with the victims and survivors of Haiyan, and we show our solidarity by continuing our fight for a just solution to climate change."

Following an electrifying and emotional appeal for action from Yeb Sano, climate commissioner for the Philippines, three young climate activists raised a banner in solidarity with the people of the Philippines – for which they have subsequently been thrown out of the climate negotiations. Friends of the Earth Europe is calling for their re-admission.

Maruska Mileta from Young Friends of the Earth Europe said: "Corporate sponsorship is omnipresent at the climate talks, yet three youth were ejected for banners of solidarity – we ask where the priorities of these negotiations lay, and call for their readmission. Our message to Mr. Sano and the Philippines was simple: our strength lies in your strength. We stand with you."

Tackling climate change means changing the unjust and unsustainable economic system, especially our dependence on polluting fossil fuels and other forms of dirty energy which is driving land grabbing, pollution, deforestation and the destruction of ecosystems, as well as human rights abuses, health problems, premature deaths, and the collapse of local economies.

Friends of the Earth Europe are calling on European politicians to work towards an equitable, ambitious and people-centred solution to the climate crisis. This means fast and fair emission cuts in line with science, financial assistance to developing countries so they can adapt to the impacts of climate change and tackle urgent development needs, and a mechanism to compensate for all that will be lost due to climate change.