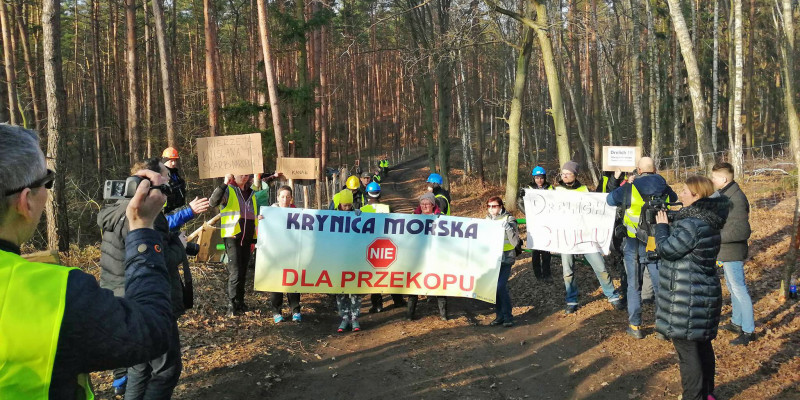 Environmental organisations have appealed to the European Commission to step in and halt the illegal destruction of a key nature site in Poland.

The Polish government has overruled protests from local governments, communities and environment groups and started construction of a canal between the spectacular Vistula Lagoon and the Baltic Sea.

The construction has no environment permit and the Environmental Impact Assessment required under EU law has not been done. Local people and civil society have only had limited access to proceedings.

Local communities and authorities have protested at the site since logging began on February 15.

Maria Staniszewska of the Polski Klub Ekologiczny/Friends of the Earth Poland said: "This canal is unnecessary and opposed by local communities and the local government. It will cause untold damage to an incredible place for nature as well as damage the local tourist economy. The fact that this destruction has started illegally shows the contempt our government has to the rule of law. We call on them to immediately stop the logging of the forest."

The 90km-long lagoon and accompanying Vistula Spit is protected under European law for its nature and is also a popular tourist location. The westernmost point of Russia is on the Split, and the only access to the sea is through the Russian-controlled Strait of Baltik. Citing conflicts over access to the sea with Russia, the Polish government granted permission to start the construction on February 15.

Environmental organisations have written to the European Commission asking for its immediate intervention to ensure that EU law is upheld. The destruction or damaging of designated Natura2000 sites without an adequate environmental assessment breaks the EU's Birds and Habitats Directives. These laws are some of the best in the world for protecting nature but are too often flouted by EU member states. Poland was last year forced to halt the destruction of the ancient Białowieża forest after the European Court of Justice threatened hefty €100,000 daily fines.

Adrian Bebb, nature campaigner at Friends of the Earth Europe said: "The Polish government has once again flouted their commitments to protect our nature and has started this illegal environmental hooliganism. We call on the European Commission to step in and demand the destruction stops."