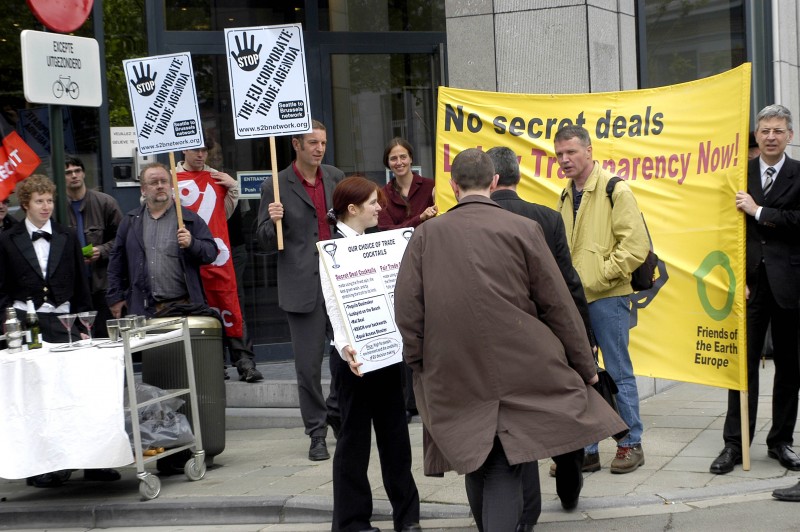 Campaigners from Friends of the Earth Europe, CEO, 11.11.11 and ATTAC dressed up as waiters to serve the cocktails. A giant cocktail menu offered the choice of "Secret Deal" cocktails such as the "Tequila Dealmaker" and "Fair Trade" cocktails like the "Transparency Sunrise". A big banner urged "No More Secret Deals".

The protest highlighted the privileged access that the EU gives to the service industry and the negative impacts this has on the EU trade agenda for development and the environment.

Paul de Clerck, Corporate Transparency campaigner at Friends of the Earth Europe said, "The European Services Forum has invited the 133 Committee of EU trade officials to a secret meeting today in order to put forward their priorities in the WTO services negotiations (GATS) [1]. They are enjoying privileged access to lobby influential EU trade officials."

"We see the results of secret business lobby meetings like these in the positions adopted by the EU in the WTO talks, where the EU acts only to further the expansion and profit-making interests of European services corporations [2]," Marc Maes, Campaigner for the Belgian development NGO coalition 11.11.11 added.

Eric Wesselius, of Coporate Europe Observatory concluded: "If the European Transparency Initiative is to succeed in building trust in the EU institutions, exclusive meetings like this should not take place. Lobby meetings should be transparent and include all stakeholders [3]."

[1] Friends of the Earth and CEO have obtained leaked documents, which show that the " Informal Meeting between ESF and Members of the 133 Committee Ad-Hoc on Services" was prepared together with the Austrian trade officials, the General Secretariat of the Council and the European Commission's DG Trade. The documents show the meeting to be arranged in the context of the GATS negotiations.

The 133 Committee acts as a consultation body to the Commission on trade issues and is composed of representatives from the EU Member States and from the Commission.

[2] In the GATS negotiations, the EU is pushing for foreign banks to be allowed full ownership of banks and insurance companies. Also, it wants the removal of a broad range of financial regulations which currently hinder profit strategies of the European financial industry abroad. These tactics undermine governments' abilities to maintain financial stability and p bank services to poorer clients.
The EU prioritises the interests of Europe's supermarkets that are expanding into developing countries. For example, the EU is pushing for elimination of the economic needs test. This agenda does not take into account that small shops and small suppliers would then have little chance to survive in those countries.
The EU has also pushed for the liberalisation of drinking water and sanitation services, even though civil society insists that liberalisation of this kind would affect basic needs and human rights.
More info on the EU's corporate trade agenda can be found at: http://www.foeeurope.org/publications/2005/EU_corporate_trade_agenda.pdf

[3] NGOs have met with the individual members of the 133 Committee in the past, but have never been given the opportunity to host an entire meeting of the Committee, as the ESF is doing today.