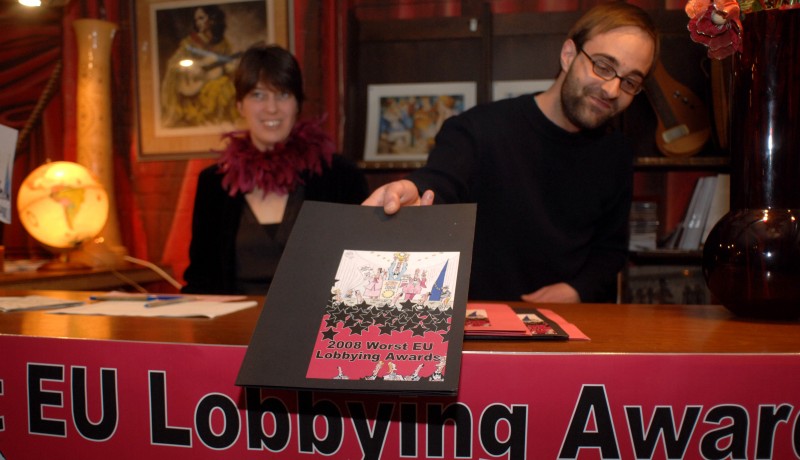 Brussels, 4 December - German car manufacturers BMW, Daimler and Porsche were disgraced today when they were named winners of a public poll for the 'Worst EU Lobbying' Award 2007. The German Atomic Forum was also named and shamed with a special prize for 'Worst EU Greenwash' at a ceremony in Brussels [1] hosted by the award organisers Corporate Europe Observatory, Friends of the Earth Europe, LobbyControl and SpinWatch.

A 'representative' of BMW, Porsche and Daimler being presented with an award for the Worst EU Lobbying in 2007. Photo credit: Lode Saidane/FoEE.

A 'representative' of the German Atomic Forum being presented with an award for the Worst EU Greenwash in 2007. Click the photos for high resolution versions. Photo credit: Lode Saidane/FoEE.

BMW, Daimler and Porsche - nominated together in the worst EU lobbying category - gained more than 30 percent of the vote. Their joint lobbying offensive designed to water-down and delay the mandatory CO2 emission reduction targets proposed by the Commission after voluntary targets were not met [2] was deemed to be the worst and most deceptive by voters across Europe.

"BMW, Daimler and Porsche are the worst among the car industry lobbyists," explains Erik Wesselius from Corporate Europe Observatory (CEO). "When the Commission proposed compulsory CO2 targets, the car companies reacted immediately with a lobby campaign full of misinformation and scaremongering. Decision-makers were manipulated with grossly exaggerated threats of factory closures and job losses. The outcome of this year's 'Worst EU Lobbying Awards' shows that European citizens strongly object to this type of manipulative and dishonest lobbying."

The special greenwash prize for the most audacious attempts to gain unjustifiable green credentials was awarded to the German Atomic Forum, which received more than a third of votes cast. It was nominated for its campaign aimed at improving the image of nuclear energy. Under the slogan "Germany's unloved climate protectionists" it featured images of nuclear power plants placed in unpolluted and unspoilt natural environments. [3]

"The German Atomic Forum took advantage of the public's concern about climate change to promote nuclear energy," says Ulrich Mueller from LobbyControl. "The one-sided ads use idyllic pictures of nature to gain public acceptance of longer lifespans for old nuclear power plants, ignoring the associated risks. The victory of the German Atomic Forum for worst greenwash shows that the public will not be conned by these attempts to gain unwarranted green credentials."

The runners-up to BMW, Daimler and Porsche in the worst EU lobbying category were EPACA (European Public Affairs Consultancies Association) for its high-profile campaign against the European Commission's plans for a lobby transparency register, and PR consultancy Cabinet Stewart for running the International Council for Capital Formation - a fake European think-tank that serves as a front organisation for mainly US-based opponents of the Kyoto Protocol.

In the worst greenwash category the German Atomic Forum took the prize ahead of runners-up BAE Systems - nominated for promoting deadly weapons as environmentally friendly, and oil giant ExxonMobil - for purporting to be reducing greenhouse gas emissions when in reality its emissions are increasing.

More than 6600 people across Europe participated in the online poll to decide the winners of the awards.[4]

Through the Worst EU Lobbying Awards, the organisers aim to raise public awareness of controversial lobbying practices in Brussels. This year's awards coincide with debate in the European Parliament about new lobbying rules, as a response to the European Transparency Initiative (ETI) proposed by Commissioner Kallas.

"The dubious behaviour of this year's nominees demonstrates precisely why we need more effective transparency and ethics rules around EU lobbying. The European Parliament must act to oblige lobbyists to disclose who they are lobbying on whose behalf and how much money is involved," says Christine Pohl of Friends of the Earth Europe.

"By voting in large numbers for the European Public Affairs Consultancies Association (EPACA), who are actively campaigning against EU lobby disclosure rules, European citizens have spoken out in favour of greater lobbying transparency," Ms Pohl added. [5]

[1] The awards ceremony will be held on 4 December, 18:15-19:45 (doors open 17:30) at Botanique, Witloof Bar, Rue Royale 236, 1210 Bruxelles. The evening will highlight the absurdities and ironies of the EU lobbying and 'public affairs' world in a humorous, tongue-in-cheek way. The winners will receive trophies from a Master of Ceremonies and stand-up comedian Christina Martin. The evening will also feature a short speech on the European Parliament's ongoing debate about lobbying and transparency, plus entertainment, video and music from upbeat franco-belge band Afota.

Interviews will be available with spokespersons from the award organisers - Corporate Europe Observatory, Friends of the Earth Europe, LobbyControl and SpinWatch.

[2] Further information about the scaremongering campaign of BMW, Daimler and Porsche can be found at:
http://www.worstlobby.eu/2007/vote/info/4/worstlobby_en

[3] Further information of the German Atomic Forum's greenwashing campaign can be found at:
http://www.worstlobby.eu/2007/vote/info/8/worstgreenwash_en

[5] In March this year, the European Commission announced that it will launch an online lobbyists register, in which all EU lobbyists are expected to disclose basic data, including funding sources and other financial information. The European Parliament is currently drafting a response, which includes a review of the Parliament's own rules around lobbying. Six Parliament committees are involved in the review, coordinated by MEP Alexander Stubb. The main controversy is around the issue of whether new rules around lobbying should include financial disclosure. The organisers of the 'Worst EU Lobbying Awards' believe that financial disclosure is essential for a meaningful lobby register. The European Commission, meanwhile, will on December 12th present a long-awaited communication on "Delivering best practice in professional ethics in the Commission", which will include possible measures to limit conflicts of interest and other contentious issues concerning the Commission's relations with lobbyists