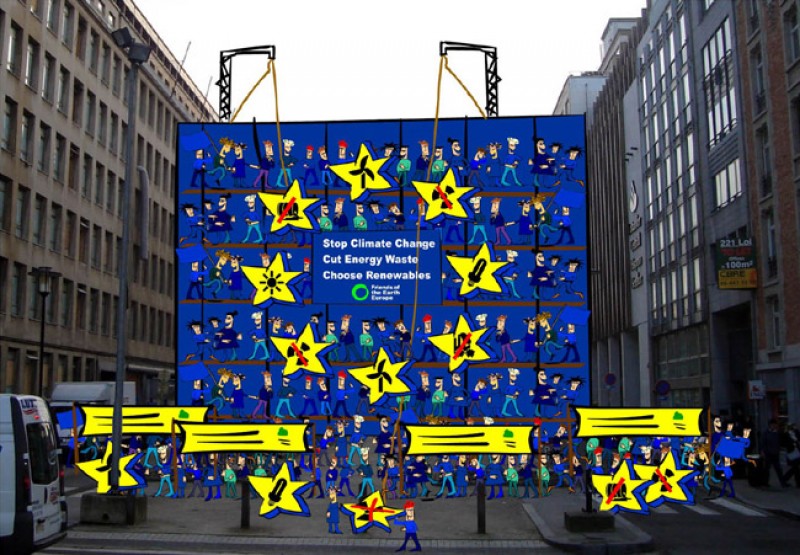 Brussels, March 6th - Friends of the Earth Europe has demanded that governments focus on the impending threat of climate change when they settle Europe's energy future at the EU Spring Council at the end of this week. As EU leaders agree on the energy Action Plan on Friday, hundreds of activists from fifteen countries across Europe will form a Giant EU Energy Flag right outside the meeting, demanding that governments "Stop Climate Change. Cut energy waste. Choose renewables."

Jan Kowalzig, climate campaigner at Friends of the Earth Europe, said:
"As EU leaders seal Europe's energy future, they absolutely must make fighting climate change the guiding imperative and should not compromise on that goal in their scramble for energy security. The EU's energy Action Plan, due to be agreed upon at the Spring Council, will fall a long way short in making Europe's energy more sustainable unless targets for both renewables share and reducing greenhouse gases are raised and tightened and a real target is adopted for cutting energy waste."

"People across Europe are sick of their energy coming from dirty sources. Friends of the Earth will be representing their views right outside the EU Spring Council on March 9th, as hundreds of activists will form a Giant EU Energy Flag and demand that their governments stop climate change, cut energy waste and choose renewables."

The Heads of States look set to adopt a unilateral target for the EU of reducing greenhouse gas emissions by only 20% by 2020, compared to 1990 levels, despite their concurrent acceptance that developed countries must cut emissions by 30% in the same timeframe to avoid catastrophic climate change. Friends of the Earth has highlighted this double standard in recent weeks and insists that the EU set itself a target to cut its domestic emissions by at least 30% by 2020, compared to 1990 levels.

"It would be a dangerous discrepancy to only commit to reducing emissions by 20% by 2020, when scientific and political analysis all point to 30% as the critical reduction needed to avoid catastrophic climate change. A target of less that 30% will indicate to the international community that Europe is shirking its responsibility on climate change." Mr Kowalzig said.

On renewables, a target is likely to be adopted to provide 20% of primary energy from renewable energy sources by 2020. Friends of the Earth continues to push for this target to be higher [1] and for it to be toughened into a binding target. In addition, the group warns that one broad target for overall energy use will not be sufficient to stimulate investment and technological advancement across a range of varied sectors like electricity generation or heating and cooling - a problem that even the European Commission itself has acknowledged. [2]

"Europe is waking up to the fact that renewable energy is clean, safe and economically viable, so a wise investment. But as it is a young market, governments need to secure investor confidence. Just an overall target for the share of renewable energy in the total energy mix is too vague to give clear guidance. We also need binding and separate sub-targets for of 35% for electricity production and 25% for the heating and cooling sector." Mr Kowalzig added.

Regarding energy efficiency, the European Commission and Energy Ministers alike have acknowledged that Europe has the potential to cut energy waste by 20% by 2020 at zero net costs. No doubt the Heads of States will reiterate this on Friday, but Friends of the Earth underlines that governments have so far failed to firm up this potential into an actual target. No concrete commitment has yet been made by Member States that they will actually take action to achieve this 20% saving.

"Europe has a vast potential to stop wasting energy, but EU governments constantly fail to agree concrete steps to tap into that potential. Europe's governments must swap their grand words with real action, based on binding targets and powerful legislation," Mr Kowalzig concluded .

NOTES:
[1] The EU is capable of achieving 25 percent renewables share given the technological improvements and opportunities that exist. ("Target 2020 - Policies and Measures to reduce GHG in the EU"; Wuppertal Institute and WWF 2005; see http://assets.panda.org/downloads/target_2020_low_res.pdf)

The European Parliament has also adopted a resolution calling for a target of 25 percent renewable share (February 14th 2007): See text of resolution.

[2] The European Commission's own impact assessment of the proposed "Renewable Energy Roadmap" concludes that failing to agree sector-specific targets will delay technological development and commercial deployment of renewable energies and increase climate change abatement costs in the long-term. It notes that "a single broad target is too unfocused and would fail to provide sufficient guidance and certainty to businesses operating in specific sector of the market."
See 'Renewable Energy Roadmap - Impact Assessment', SEC (2006) 1719. Furthermore, the European Parliament has adopted a resolution calling for sector specific targets for heating and cooling and electricity (February 14th 2007). See text of resolution.

Target 2020 - Policies and Measures to reduce GHG in the EU