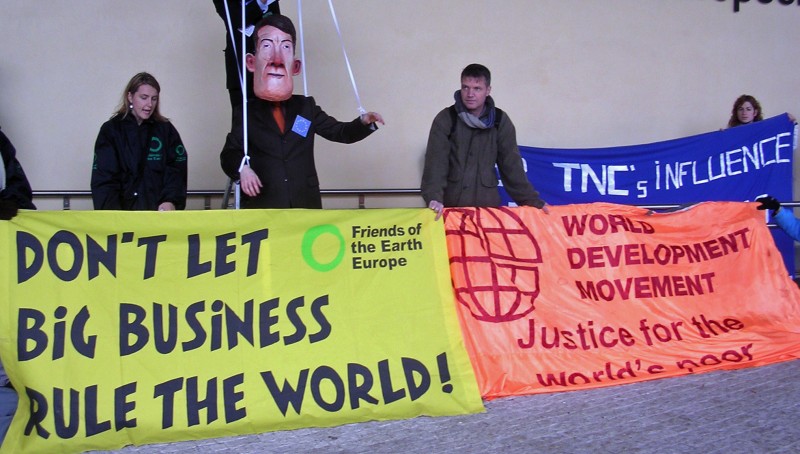 Strasbourg, 21 May 2007 - The European Parliament is on the brink of backing an open market approach to trade that will give big European corporations great privileges at the expense of small businesses, farmers, workers and the environment, warned the Seattle to Brussels network today [1]. The network of NGOs, trade unions, associations and social movements today urged Members of the European Parliament to reject a report that endorses Mandelson's trade approach [2].

Frédéric Viale, spokesperson for ATTAC France, said:
"MEPs must not endorse Mandelson's open market approach to trade, because it will lead to further poverty and exploitation for workers and farmers - in both Europe and in developing countries.� Mandelson prioritises the profits and market shares of large EU corporations way ahead of labour, social and environmental standards."

The Caspary 'Global Europe' report endorses the 'Mandelson doctrine' on Europe's competitiveness and bilateral trade policy [3]. This strategy not only promotes bilateral and bi-regional free trade agreements with almost all regions of the world, but also plans major social and environmental deregulation within the EU, all in the name of 'competitiveness'. [4]

This strategy will have devastating impacts on workers and farmers in developing countries. Opening up markets in developing countries can lead to the destruction of infant industry as a result of unfair competition from European corporations - threatening millions of livelihoods. Rural communities, often still a majority of the population in the targeted countries, will be particularly harmed as processed agricultural goods sold below their cost of production will flood developing country markets. Farmers who simply cannot compete with powerful European agribusinesses and supermarkets will be driven off their land.

Mandelson's doctrine will also hurt European family farmers and workers. While the Commission pretends that increasingly open and deregulated markets will create growth and jobs for Europe, this strategy has proved to lead to a social impasse. Increasing direct and unfair competition and trade liberalisation have lead to more job and social insecurity for the workers, deepening inequalities and accelerating relocation of sectors of the EU's economy at the benefit of increasing profit margins for European corporations.

Alexandra Strickner, trade analyst at IATP, said:
"Mandelson and the EU member states have made it clear that the interests of large businesses inside and outside Europe will be taken into account even more in the future. It seems that the interests of people and the environment have no space in this agenda."

The Seattle to Brussels Network calls on Members of the European Parliament to reject the aggressive agenda and promote economic alternatives based on solidarity, equity and principles of sustainable development.

[1] The Seattle to Brussels (S2B) Network (http://www.s2bnetwork.org) is a pan-European network of more than 70 organisations from 16 countries campaigning to promote a sustainable, socially and democratically accountable system of trade. The S2B Network is part of the global coalition 'Our World is Not for Sale' (http://www.ourworldisnotforsale.org)

[3] The 'Mandelson doctrine' is outlined in the Commission Communication 'Global Europe: Competing in the World' (4 October 2006).

[4] Read our briefing 'The new ambitions of the EU trade policy: Creating more space for corporations abroad AND at home': http://www.s2bnetwork.org/download/s2bbriefing_newambitionsofeutradepolicy